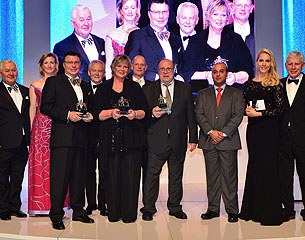 “Honour to whom honour is due” was the motto of the Gala Ball of the 2013 P.S.I. Auction. The charming Judith Rakers, German news anchor, presented this awesome gala evening show with the focus being placed on people who considerably contributed to equestrian sports. These outstanding people were honoured with one-of-a-kind handmade horse sculptures, made from Swarowski crystal.

The P.S.I. Award in the category SPORT went to a true „dressage princess“, as Klaus Roeser described her in his laudatory speech. A young woman whose most important dream became true in a very short period of time, who meanwhile won the most important title in equestrian sports and also heads the world dressage rankings. Within 20 months only, the career of the British rider Charlotte Dujardin accelerated tremendously from first starts in Grand Prix-tests to winning two gold medals at the Olympics in London. One stage on her way to London was the new world record in the Grand Prix Special at “Horses & Dreams meets Great Britain”. Charlotte Dujardin also won the gold medal at the 2013 European Championships in Herning (Denmark). A dressage fairy-tale that is certainly hard to top.

Almost all important stories in sports are only possible with the assistance and support of people who are working in the background, who are creating a sound basis for co-operation and success. The P.S.I. Award Supporter focuses on exactly these special patrons. Princess Nathalie zu Sayn-Wittgenstein-Berleburg honoured the awardee Hanni Toosbuy Kasprzak with the PSI Supporter Award for her engagement in supporting dressage in Denmark over the last 10 years. Top athletes, just as young riders, appreciate the work of the mother of Olympic rider Anna Kasprzak. She solicits sponsors, she supported the 2013 European Championships in Denmark and initiated the ECCO CUP for young dressage riders in 2005. “It is her dedication for equestrian sports that contributed to Kasprzak’s international reputation,” zu Sayn-Wittgenstein explained in front of the P.S.I. audience.

The P.S.I. Award in the category MEDIA went to the program director of the German television channel ARD, Volker Herres. Herres once described his ambition in a magazine interview with the words of the BBC-slogan “Make the popular good and the good popular!”. And this ambition was impressively presented to the guests in Ankum by his laudatory, the Chief Executive of the German railway company Deutsche Bahn, Dr. Rüdiger Grube. He always strove for perfection and knew that sports coverage had to particularly include equestrian sports. As audience ratings alone would not be the only decisive factor for his program decisions, but also a variety of different disciplines. Germany is a horse country, and according to the awardee, this will also be reflected in future programs.

Exceptional accomplishments are honoured at the P.S.I. with the LIFETIME AWARD. This week, the founder of the Aachen School of Equestrian Art and Design, Prof. Dr. Arno Gego, had invited to come to Aachen for the new “mini Davos” of equestrian sports, the First Global Equestrian Forum – in co-operation with the Performance Sales International. The graduated mechanical engineer and professor at the Rhenish Westphalian Technical University RWTH Aachen has been committed to equestrian sports from childhood on. Successful at the upper levels of show jumping, he started to design show jumping courses at the age of 20 and has been international head course designer since 1992. He had been responsible for the show jumping courses at the CHIO Aachen, one of the most important tournaments worldwide, for 22 years. With his expert knowledge, gained over five decades, he enriches committees such as the advisory board course design of the German Judges‘ Association, the International Course Designers Council or the International Equestrian Federation (FEI). The German Equestrian Federation (FN) particularly honoured Gego in 2008 with a golden award. Prof. Dr. Arno Gego’s collection is now complemented by the P.S.I. Lifetime Award. Omar Al-Mannai, director of the Al-Shaquab Riding Academy, emphasized his brilliant work in his laudatory speech.

Despite all the glamour that usually accompanies this event, it was typical for the organizers of the P.S.I.  to also think of those who are less fortunate. “Riding against Hunger” stands for social responsibility and has been supporting the German Agro Action since 2012.  Patron of this initiative is Federal Minister Dr. Ursula von der Leyen who is a passionate rider herself. Publisher Gudrun Bauer, Bauer Media Group Hamburg, and equestrian sports expert Ullrich Kasselmann founded this initiative and involve themselves with other well-known riders and horse enthusiasts to help people in need.

To particularly further support this initiative, the organizers decided to hold a special auction during the Gala Evening and to offer things that aren’t available anywhere else. Two passports for the DKB-Riders Tour, one cooking course for four persons with Cornelia Poletto or a Special-DTM-Package were put up for auction. Paul Schockemöhle spontaneously decided to offer another prize: One of the 30 foals of the top sire London already changed owner before its birth for this good cause.  Swiss Natascha Muller (owner of Lord Sinclair) paid 46,000 euro for the the foal. Laudator Omar Al-Mannai paid 20,000 euro for the Special-DTM-Package. The idea to hold this extraordinary auction before the P.S.I. Auction was well received. Total proceeds of 84,000 euro will now be transferred to the German Agro Action in the name of “Riding against Hunger”, a perfect time right before Christmas.