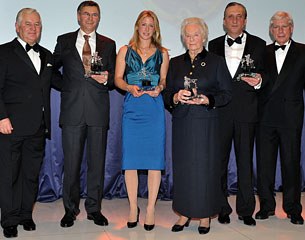 The winners of the P.S.I. Awards 2010 are the Grand Dame of dressage, Rosemarie Springer, the dressage vice-World Champion, Laura Bechtolsheimer

, the German National Trainer, Otto Becker, and the Chief Editor of the Bild newspaper, Kai Diekmann. The presentation of the awards was the social highlight of the fantastic P.S.I. Gala night.

Ullrich Kasselmann and Paul Schockemoehle, the “makers” of the most important riding horse auction in the world, the Performance Sales International, presented the awards in three categories: two distinctions in the category Sport, and one in the category Lifetime Achievement and Media respectively.

The British dressage rider Laura Bechtolsheimer from Gloucestershire, who was born 1985 in Germany, won three silver medals at the World Equestrian Games in Kentucky and crowned her remarkable career with this achievement, sketched out Frank Kempermann, chair of the FEI Dressage Committee, in his laudation. Laura effortlessly rode herself into the hearts of the dressage fans with her top horse Mistral Hoijris. It was the crowning achievement of a year’s work with an extraordinary horse. The smart blonde is a role model and prototype for the next dressage generation. Exactly how much determination and love for the dressage sport was in the young Briton was obvious, explained Ullrich Kasselmann, as Laura Bechtolsheimer took her first steps into the international sport at the Young Rider Festival in Hagen a.T.W.

Otto Becker is the goldsmith of the German show jumping team in Kentucky. After team bronze at the European Championships 2009 in Windsor, the team followed up with gold in the USA at the beginning of October. It is the tentative highlight of the former top rider’s tenure as national trainer, a position he took on January 2009 and which started under relatively difficult times. Hartmann von der Tann, former chief editor by the ARD and equestrian sport commentator, drew a picture in his laudation, which was read by Bettina Schockemoehle while he was unable to be present due to an illness, of a man who helped the German jumping sport through it’s hardest times to a new look through competence, intelligence and conceptual work.

Kai Diekmann, the chief editor and publisher of Germany’s highest circulating daily newspaper Bild, received the P.S.I. Award 2010 in the category Media. His laudation was written by none other than ARD programme director Volker Herres – former chief editor of the NDR in Hamburg. His laudation must be read for him because his flight to the event was cancelled due to winter weather. In the history of the P.S.I. Awards, Kai Diekmann is the first chief editor of a daily newspaper to receive a P.S.I. distinction.

The guests were waiting with great suspense to find out the winner of the P.S.I. Lifetime Achievement Award and reacted with great approval and enthusiasm for the award winner – Rosemarie Springer. In her time, the now 90 year old Grand Dame of the equestrian sport created quite a sensation in the dressage saddle at Olympic Games, World and European Championships, won the German Dressage Derby 1966 and was a five-time German Ladies Champion. Madeleine Winter-Schulze, Germany’s equestrian sport patroness, held the laudation for Rosemarie Springer, who she often met herself in the dressage ring as a competitor. Winter-Schulze described a woman who is always up to date on the sport, follows the development of the equestrian sport with full interest and, following her own career, helped many young talents on their way. Springer supported and trained young talents and also took eventing teams under her wing. The Young Eventing Rider Development Association in Schleswig-Holstein is the result.

The P.S.I. Awards are symbolized through an extraordinary sculpture which is created by the world famous company Swarowski Crystal.. The Performance Sales International awards are presented yearly on the evening before the P.S.I. Auction to prominent personalities in and surrounding the equestrian sport.

All information over the P.S.I. Auction can be found online at www.psi-auktion.de.