Barn or Yard? When Given the Choice, Where Does a Horse Choose to Spend its Time? 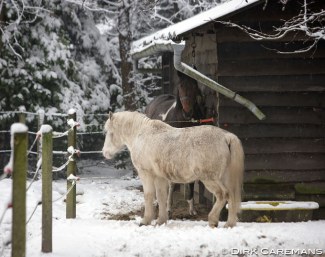 Horses are commonly stabled in barns during the night and during inclement weather, with turn-out based on human schedules and preferences.

Researcher Sue Wilson of Wishing Well Services in Guelph, Canada, made a scientific assessment where a horse chooses to be during typical winter and spring weather in Ontario, Canada.

This study was designed to assess the amount of time that a horse chooses to spend in the shelter of a barn or outside in a paddock versus time of day and seasonal weather conditions.

A Garmin GPS was attached to the dominant horse (Major) and his location was tracked each minute for 10 days from January 25-February 4, 2019 (winter) and 7 days from May 19- 26, 2019 (spring). Data was downloaded into MapQuest software and location was classified as either “in the barn” or “outside”. Location data were summed for each hour for comparisons of location to time of day and weather conditions. Hourly weather data was available from a Canadian Weather Station, located 10 km northwest of the farm. This data included temperature, wind speed, wind chill and humidex.

Major’s location in the barn or outside was analyzed for 368 hours during the study period. In total, Major spent 79.0% of his time outside. He spent significantly more time outside in the spring compared to the winter (87.5% vs. 74.5%, p<0.05). The weather conditions varied considerably over the study period. Hourly average temperatures including wind chill or humidex ranged from -36 to +30oC. The temperature range dataset was divided into 37 hour deciles and Major’s location was analyzed over this range.

The study horse lives in a small herd in a large pasture with access to a cozy barn for shelter. The weather conditions varied considerably over the study period with hourly average temperatures including wind chill or humidex ranging from -36 to +30oC. GPS tracking revealed the horse chose to spend the majority of time (79.0%) outside. He tended to spend more time in the barn in the extreme cold or extreme heat, while spending 90.8% of his time outside in the moderate temperature range of -18 to +15oC.

So when given the choice, this horse spent the majority of his time outside vs. in the barn. He tended to spend more time in the barn in temperatures of extreme cold (less than -18oC) or extreme heat (more than 15oC). Time of day was not a predictor of his choice of barn or yard.