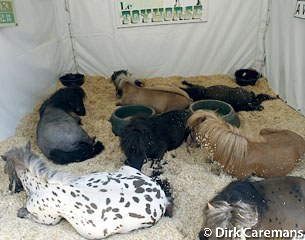 Resting behaviour is frequently used as a welfare measure in horses; this indicator has been adopted from bovine research where it has been shown to alter with environment and management changes. However, unlike bovines, equine resting behaviour may also be influenced by the amount of ridden exercise the horse has performed through the day.

If ridden exercise does have an effect, then the level of exercise should be considered when using resting behaviour as a measure of welfare. Resting behaviour includes rest standing (ST), sternal (SR) and lateral (LR) recumbency, which have been used in various studies to identify how comfortable a horse is with its surroundings. For horses to achieve paradoxical sleep (PS or REM sleep) they must be in the lateral position and if horses do not reach PS then welfare could be compromised.

Researches Jones, Griffin, Hall and Stevenson of the Animal Behaviour, Performance and Welfare Research Group, at the Nottingham Trent University, investigated the effects of ridden exercise on night-time resting behaviour of individually housed horses.  They presented their findings at the 2016 International Equitation Science Conference in Saumur, France, on 23 - 25 June 2016.

The aim of this study is to investigate whether ridden exercise has an effect on the horse’s resting behaviour compared to non-ridden exercise in horses housed individually.

Eight geldings, aged 7-16 with heights 152cm-172cm, were used. All horses were housed individually in American Barn style housing and were in full ridden work. CCTV cameras were used to monitor the horse from 6pm-6am for 5 nights each week. During the not-in-work week (NW), horses were turned out to graze from 8am-3pm. During the work week (WO), horses were stabled except when ridden in normal riding school sessions for around two, one-hour periods per day. The duration of ST, SR and LR behaviours were recorded and analysed.

The results suggest that horses in work spend less time overall resting but spend more time SR than those not it work which spend more time ST. This suggests horses’ alter their resting pattern when in work, therefore this needs to be considered when using rest as a measure of welfare.

As this was a pilot study it is possible that these results could reflect an alteration to the horse’s 24 hour resting time budget with horses in NW being SR more during day (which was not measured here) compared to night. However, these preliminary results suggest that level of exercise should be taken into account when using rest behaviour as a welfare measure. Further research into how various environmental factors influence horse rest patterns are due to be carried out.

Resting/lying behaviour is used as a parameter to assess equine welfare. The night-time resting/lying patterns of stabled horses in ridden work and not in work were measured. Horses in work spend less time resting overall but spent more time lying in sternal positions than horses not in work. Therefore, work level should be considered when using rest/lying behaviour as a measure of welfare.