Nocturnal Sleeping and Eating Patterns of Horses on Straw and Shavings 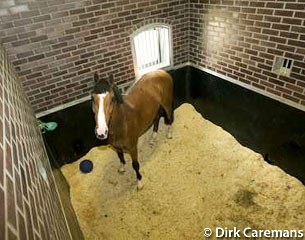 At the 2011 ISES Conference a study by researchers from Hartpury College was presented on the frequency and duration of nocturnal ingestive and sleep behaviours of horses bedded on straw versus shavings.

Horses are stabled overnight for a number of practical reasons however there is little research quantifying nocturnal equine behavioural patterns in different housing environments. The aim of this study was to establish whether differences in frequency and duration of sleep and ingestive behaviours were apparent for horses bedded on straw or shavings.

Ten geldings of mixed breed (average age 7.3 years) bedded on either straw (group one) or shavings (group two) for more than five months previously, were observed between 1900 and 0700 hours. All horses were individually stabled on the same yard and underwent light to medium work but were privately owned and therefore subject to different routines. Each stable measured 12x12 ft and bedding included banks with minimum bed depth approximately 10 cm. Duration of behaviour was recorded in minutes using a video recorder. Only sleeping behaviours lasting more than one minute were recorded. Frequency of behaviour was recorded using continuous focal sampling.

On average horses spent 54% of the observation period engaged in ingestive behaviour, which included ingestion of bedding. No significant differences were observed for frequency (Z=-0.420; P>0.05) or duration (Z=-0.731; P>0.05) of ingestive behaviours between group one and two. 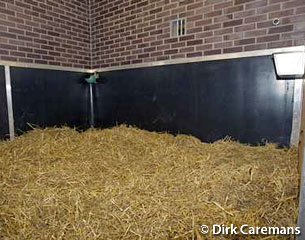 For both groups duration of bedding ingestion peaked between 0100 and 0700. In total group one spent on average more time ingesting bedding (70 mins) compared with group two (7 mins). Casual observations revealed horses were motivated to alternate between eating hay and bedding. The average duration of nocturnal ingestion is comparable with previous data conducted at the same time of year but studying feral horses.