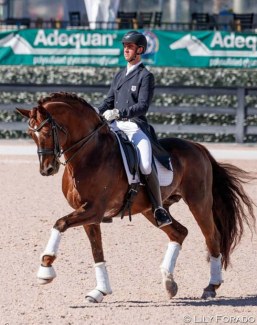 The 16-year old Hessian stallion Rassolini FRH has been retired from competition sport and has moved to Peridot Equestrian, the farm of American young rider Katherine Mathews, where he will stand at stud.

Rassolini is bred by Horst Hofmann and is by Rubioso N out of Sweetheart (by Silvano N).

He was initially started by  Klarissa-Alexandra Liss, who rode him to an 8th place at the 2006 Bundeschampionate as a 3-year old. Owned by Detlef Ruddat and competed by Kathrin Meyer zu Strohen since 2008, Rassolini went to the 2008 World Young Horse Championships in Verden and the Bundeschampionate Finals in Warendorf, where he finished fourth at both events.

In 2010 they won the Nurnberger Burgpokal Finals  for Developing Prix St Georges horses at the 2010 CDI-W Frankfurt. In June 2012, Meyer zu Strohen and Rassolini made their national Intermediaire II debut at Isernhagen.

Ebeling and Rassolini made their international Grand Prix debut in 2014, but were never able to crack the 70% marker in a CDI Grand Prix class. Ebeling last competed him at the CDI Del Mar in April 2017.

In January 2018 the horse sold to Christina Morgan as young rider horse for Christian Simonson. He had competed at the 2016 and 2017 North American Junior Riders Championships on Herzkonig (by His Highness x Weltmeyer)i. The new duo made its CDI debut in March 2018 in Del Mar and went to the 2018 North American Young Riders Championships, where they were 6th in the team test to win team silver, but they were eliminated from the individual. In 2019 they showed at one CDI in Wellington, after which the horse injured itself.

On 27 August 2019 Simonson announced that the Rassolini has moved to his new home in California.

"Rasso has been my partner for 18 amazing months. In that time, this special horse taught me a lot about dressage and what it takes to ride an incredible stallion, and we have experienced great success and sadness together and, one of our victories includes our NAYC silver medal," said Simonson. "After a tremendous effort to bring him back from injury, we made the heartbreaking decision to let him go to a wonderful new home at Peridot Equestrian, where he will have a great and happy life, and I can visit him when I come back to California."