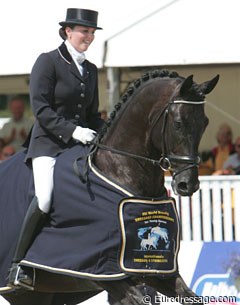 The Dutch bred licensed stallion Westpoint won the 6-year old qualification Round for the Finals today, bringing much needed relief to the Dutch delegation whose KWPN horses have been performing below standard yesterday and today. The black stallion Westpoint (by Jazz x Michelangelo) stood out with his athleticism, high quality basic gaits and almost virtually clear ride. Presented by Emmelie Scholtens, the stallion scored 8.58 to surface at the top.

Westpoint has the typical outlook of a KWPN bred Jazz offspring, but his movement capability exceeds the other Jazz get here at the show. In trot, the stallion moved uphill with much lightfootedness and freedom in the shoulder. He lacked a bit of bending in the half pass left but in the trot extensions, this horse actually lengthened his frame and steps instead of quickening like many do (9.0). The extended walk was lovely: big overtrack and good relaxation (8.5). 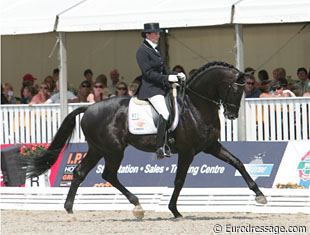 In canter there was a spook during the extension, but Scholtens recovered quickly. It did put some tension in the second flying change which was a bit late to the aids, but still correct and the horse tended to canter a bit downhill after that (8.8). He scored 7.8 on submission and 8.8 on general impression. In trot Westpoint regularly got slightly behind the vertical, but the ground quality of the horse was so copious that the overall score of 8.58 was totally justified.

A playful Westpoint took advantage of the award ceremony to test his rider and buck and bop around a bit. Scholtens couldn't be shaken and stayed fixed in the saddle of her steed. 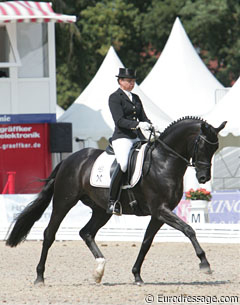 The small looking Hanoverian stallion Florinero (by Fürst Heinrich x A Jungle Prince) landed a second place with 8.44. Owned by Sven Rothenberger and ridden by Dorothee Schneider, Florinero has an elegant trot (8.4), a very good extended walk (8.5) and smooth canter with two solid flying changes (8.0). It was his total obedience to his rider, his willingness to work and the perfect contact with the bit which made the points go up via to the high submission mark of 8.8. Florinero is probably not the flashiest moving horse of the pack, but his super training and submission made him excel.

Kathrin Meyer zu Strohen and the Hessian branded stallion Rassolini (by Rubioso N x Silvano N) positioned third in the ranking with 8.42. Owned by Detlef Ruddat, Rassolini is a divine looking liver chestnut with his beautiful silhouette. His rider had to make quite an effort in making him move spectacularly as she was constantly using her spurs in order to make her horse bounce off the ground. There was a loss of rhythm at the beginning of the second extended trot and the horse lost his balance while collecting at the end of the diagonal (8.7). In walk there was much overstep though there was a slight loss in the clarity of rhythm (8.5). The canter work was nice and uphill but at the end of the ride the horse lost some power from behind (7.9). His marks were completed with 8.4 for submission and 8.6 for general impression. 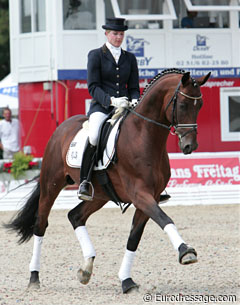 Last year's silver medal winning Imperio, a Trakehner stallion by Connery x Balfour xx, now slotted in fourth, posting a score of 8.34. The bay stallion, ridden by Anna-Sophie Fiebelkorn, has much elasticity and suspension in trot (8.9) He flowed from one movement into the other and got pats from his rider for the rein back. The walk was over the back and ground covering (8.4), while the canter work was solid but not extravagant. The first flying change was short and croup high. He then spooked in the extended canter and made a flying change, but the second scripted flying change was good. The submission dropped to 7.6 though the general impression was 8.6.

The first starter of the day, Nicole Casper on Birkhofs Denario (by Denaro x Fair Play) kept the lead for a long time but ended up fifth eventually with 8.12. The ponyesque licensed stallion showed off a well regulated trot with a very good tempo (8.0). He did tilt his head a bit in the shoulder in. His walk has excellent overtrack but he jogged a few steps while changing diagonal (7.7). The grey is uphill in canter and covers much ground in the extensions, but if there were more roundness in his front leg the gait would have been more impressive (8.5). The first flying change was a bit crooked but the second one was good. They also got 8.0 for rideability and 8.4 for general impression. 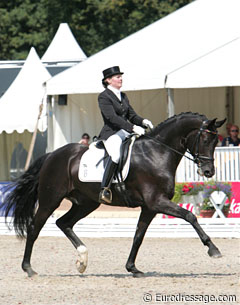 Danish Fie Skarsoe trailered the black Oldenburg gelding Rash (by Ron William x Cordeur) from Luxembourg to Verden to represent Germany with him. The black stallion is gorgeous to look at: ears always forward, uphill and perfectly at the vertical. In trot the hind leg should move more towards the gravitation point and Fie considerably has to spur her horse onwards, but the silhouette is lovely.

There was some loss of rhythm in the shoulder in right (8.8). The walk was outstanding (9.0) but in canter there were a few issues. The first flying change was super, but the second one was in two phases. He also spooked in the extended canter right and afterwards lost some clarity in the 3-beat rhythm (7.2). With 7.4 for submission and 8.2 for general impression, Fie and Rash tied with Denario on 8.12. 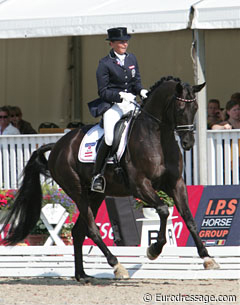 Nomen est omen for Hans im Gluck (Lucky Joe). The big surprise ride of the day came from the Austrian outsider Sabine Dürrheim on Hans im Glück, an Oldenburg stallion by Harvard x Leggiero. The dark bay stallion is not the most eye-catching horse but he was very well presented. He is not so spectacular in trot (7.5) but executed the traversal movements smoothly and was always soft in the contact with the bit. The extended walk was a real highlight in its crystal clear rhythm and ground cover (8.8). In canter he showed two good flying changes and was very obedient to his rider (8.0). His 7.8 for submission got lifted up by an 8.4 for general impression. With 8.10 in total, they finished seventh.

Three Danish horses qualified for the finals: Rash, Heslegard's Rolex and UNO Don Diego. Heslegards Rolex really stood out with his his lightfooted, active trot (8.4). Small hesitation in the shoulder in left did not really meddle with the lovely uphill appearance of the horse in this gait. The walk was good (7.8) and the canter could have been a bit rounder and over the back (7.7) but the flying changes were very fluent. Rolex' basic gaits were very functional with engaged hind legs, but the only "problem" with this ride was his rider Lone Madsen who couldn't stop working with her hands from left to right even though the horse didn't need so much controlling in the mouth! With 7.9 for submission and 8.5 for general impression, the total became 8.06 which was good for an eighth place. 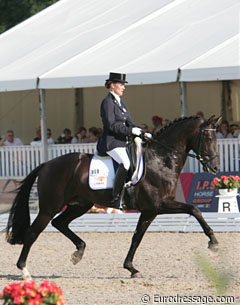 For the KWPN society, only two horses qualified for the 6-year old finals so far and those are perpetual rivals Westpoint and Wynton. After having given birth to now 3-months old Niels, Madeleine Witte-Vrees is back in the saddle. "My life has changed in a way that I only ride three to four horses a day now, instead of eight," she told Eurodressage. Vontango B and Wynton are her favourites and with the latter black stallion (by Jazz x Matador II) she finished tenth with 7.98. The gorgeous looking stallion has much knee action and in trot he moves more upwards instead of forwards. In the trot extensions, Wynton quickens his pace instead of lengthening his stride (7.8). On the second diagonal he almost moved Hackney-like. The contact with the bit was unsteady especially at the beginning of the ride, but the shoulder in left was great as well as the half passes. The extended walk was outstanding and the score of 7.9 was quite a surprise. In canter, the two flying changes were good but there was some loss in the 3-beat rhythm before the transition to trot (8.2). In both halts, Wynton stood behind the vertical. He got 7.8 for submission and 8.2 for general impression. 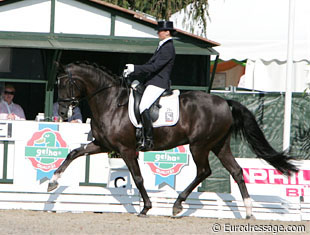 Last year's 5-year old World Champion Desperado OLD (by Dressage Royal x Rouletto) finished 11th. The trot was well regulated but the dark bay gelding became wide behind in the extensions. In the second extension he looked hurried (8.1). The extended walk was excellent (8.5). There were some problems with the flying changes in canter (7.8). The first one was in two phases and the second was ok but flat. Desperado collected fantastically out of the extended canter and he was soft in the mouth and at the vertical at all times. With 7.6 for submission and 8.2 for general impression, he totaled with 7.94. 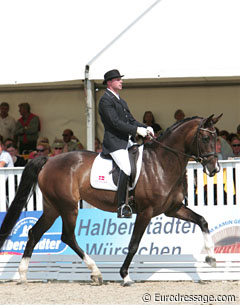 A sad story: Michael Sogaard and Dybdalgaards Margerit. At the bit check, the mare panicked from the steward and probably bit her tongue then (there was no blood during the ride). She was inspected in her box by two vets and Sogaard got the message that he was eliminated from the test (and World Championships as the Danish chef d'equipe heard that Sogaard is not even allowed to ride the consolation finals in the afternoon!) After the inspection, the rider went to watch the other rides but he was called on the phone by a Danish groom that another steward and vet had entered Margerit's box without permission and not in the presence of the owner/rider.

"Of course I accept their decision and won't oppose to it," Sogaard said, "but I'm very displeased about the way it all went." (Read More at Ridehesten.com)