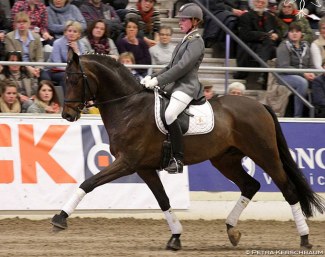 Spörcken is bred by Benedicte Meyer from Boudler, Luxembourg, and was owned by Celle. He is by Sir Donnerhall out of  La Beale Isoud (by Lauries Crusador xx x Weltmeyer x Bolero).

The dark bay stallion was licensed at the 2010 Hanoverian stallion licensing and did his 70-day stallion performance test in Adelheidsdorf in 2011. He scored 8.88 for dressage and 6.28 for show jumping to finish on a total of 7.79

Spörcken was hardly competed. Ole Köhler took the stallion to his first local show in Alvern in May 2013 and did two more that year. In 2014 he appeared at two local shows, no shows in 2015 and just one at M-level in May 2016.

Spörcken found modest interest with the German breeders. The German equestrian federation has 94 registered broodmares by him, of which an impressive amount of 44 became state premium mare. So far he has sired 6 licensed sons (Summertime Blues, Spökenkieker, Spectre, Schokolade, and two nameless ones) of which 2 are registered in the main stud book.

"When Ashley and I made the decision earlier this fall than we would continue our breeding farm and offering top stallions we went in search of a new one for 2019," said Jennifer Arnoldt. "Spörcken has all the qualities we have always looked for in our stallions and we think he is a super choice for NA breeders.