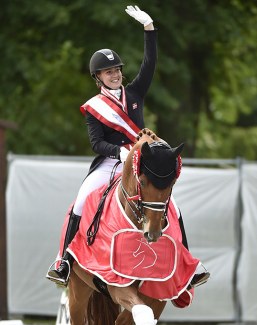 At Helgstrand Dressage the stable houses more than 300 horses, of which 250 are under saddle every day. With an increasing need for top dressage horses, the company has now secured a new strong rider to join the team, which at the moment is 21 riders.

"I am incredibly proud to have this opportunity. For many years, I have been in close dialogue with Andreas Helgstrand," said Cathrine Dufour. "Being able to train some of the world's best horses would be an honour to me and I'm looking forward to getting started," added Cathrine, who sees the employment as a natural continuation of their current cooperation.

In spite of her young age, Cathrine Dufour is a well-known name on the international scene. With numerous wins at international Grand Prix level and a FEI World Ranking as no. 5 with Atterupgaard's Cassidy, she belongs to the world elite. In addition, Cathrine has on several occations passed the magic 80% barrier and, as one of the few, managed to beat Isabell Werth.

"We are delighted that Cathrine has chosen to join our team. She has managed to train horses up to Grand Prix and her many victories speak for themselves. She has incredible discipline and work ethic and I am sure that this is the reason she has won more than most riders in only 26 years," said Andreas Helgstrand proudly, remembering the magnificent tribute she and Cassidy got at Herning Horse Show earlier this year.

Cathrine became a part of the Danish national team at only 12 years of age as a pony rider. Also, as a young rider, Cathrine had a great talent and she has won the Danish Championship no less than 14 times. As a 24-year-old, she participated at her first Olympic Games on Cassidy, where she placed 13th. 2017 she won two individual bronze medals and team silver at the European Championship. In 2018, she managed to qualify for the World Equestrian Games in Tryon but unfortunately had to cancel. Now she is focusing on qualifying for the Olympic Games in Tokyo in 2020, hoping to secure Denmark another medal.

Cathrine runs her own dressage stable, Dufour Dressage, in Roskilde, Denmark, where she trains as well as offers training to new upcoming talents. The agreement is that Cathrine will continue in Roskilde, where she will train horses from Helgstrand Dressage. The stable will act as a new sales stable. Alongside running the sales stable, Cathrine will continue her current activities, including her fan club named Dufour Club as well as training Cassidy and her new upcoming talents.