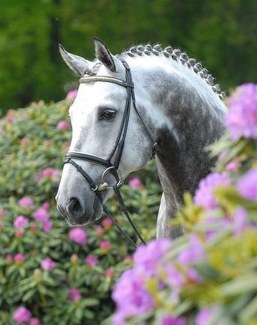 The renowned Oldenburg breeding stallion Royal Diamond has passed away at his retirement place in Normandy, France, on the weekend of 11-12 August 2018. The stallion was 24 years old.

Royal Diamond was euthanized as he was suffering from old age and had developed issues to his heart.

Bred by Hans Francksen, Royal Diamond was by Rubinstein out of Elektia (by Inschallah AA).

He was a premium stallion at the 1996 Oldenburg stallion licensing and won the 1997 Stallion Performance Test in Neustadt/Dosse.

Stationed at Gestut Vorwerk in Cappeln, Royal Diamond was trained by American Lisa Wilcox who won the reserve champion's title with hum at the 1999 Bundeschampionate in the 5-year old division. In 2000 he won the Bundeschampionate as a 6-year old. Twice he qualified for the Nurnberger Burgpokal Finals in Frankfurt and booked 40 victories up to national Grand Prix level. He was retired from sport in 2009.

When Gudula Vorwerk sold her brood farm to Sissy Max-Theurer in 2009, Royal Diamond moved to Dressage Performance centre Lodbergen. In 2012 the Swiss Wespe family also became the owners of the grey stallion and in 2013 he moved to their Swiss stallion station in Bernhardzell. Shortly afterwards he was fully retired and the past five years Royal Diamond spent in a field in a small herd in Normandy, France.