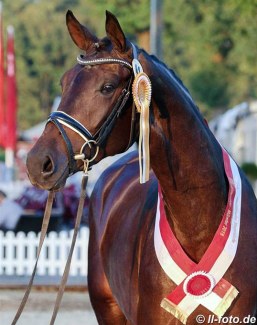 The dark bay mare Gloria (by Goldberg x Rock Forever) was named the winner of the 2018 Westfalian Elite Mare Championship held in Munster-Handorf on 27 July 2018.

The breeding stallion Escolar continues to dominate Westfalian breeding, not only in the young horse championships, but also in the mare championship. Four of his offspring moved to the champion's ring for the title of Westfalian Mare Champion.

Still, it was a mare by the KWPN stallion Goldberg that reigned supreme: Gloria, who already won the 2018 German Mare Championship in Lienen earlier in the month, also persevered in the Westfalian Championship.  Bred by Hartmut Ahmann, Gloria is owned by Gut Neuenhof.

The reserve champion was Emilie Louise MT (by Escolar x De Niro). She is bred by Klaus Grosse Lembeck and owned by Sissy Max-Theurer.

The 4-year old mare Dorietta (by Don Frederic x Fidertanz) was named the best in her age group. She is bred by Johannes Baumeister and owned by Gestut Fohlenhof.