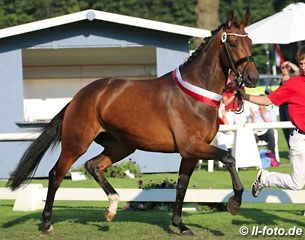 One hundred mares were invited to participate in the Westfalian Elite Mare show and 10 dressage bred mares were selected for the champion's ring, in which the overall champion was proclaimed.

Rhianna was named champion amongst of the dressage mares. Bred by the breeders' group Ruscher-Konermann, Rhianna stood out with her quality basic gaits and powerful type.

Deevoice (by Desperados x Ehrenwort) was named reserve champion. Owned by the breeders' group Hoormann & Hanke and bred by Gabor Szecsi, this mare was also the German Mare Champion in Lienen two weeks ago.

The third ranked mare was Via Mala (by Vitalis x Real Diamond). She is bred by Leonhard Querdel.