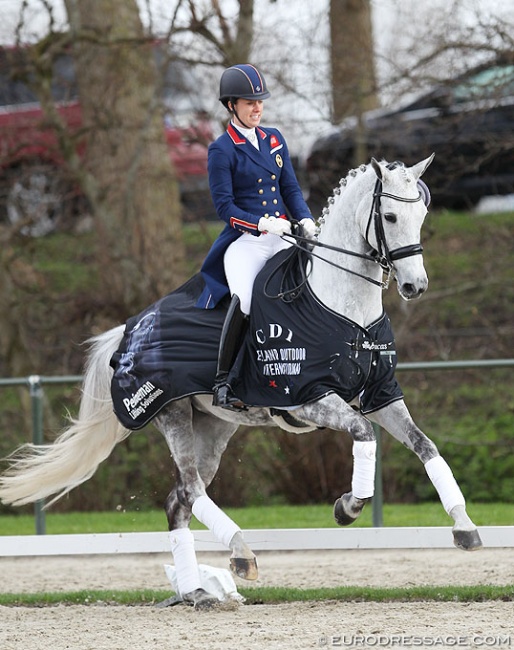 British double Olympic champion Charlotte Dujardin swept the boards at the 2018 CDI Nieuw en St. Joosland on 5 - 8 April 2018. Not only did she clock a double victory in the big tour on her WEG team hopeful Mount St. John Freestyle, but also in the small tour she scored a hattrick aboard her own 8-year old mare Florentina.

Florentina is an 8-year old Dutch warmblood mare by Vivaldi out of Avondsterina S (by Rubels x Larduc).

Dujardin acquired Florentina as a 2-year old at the Brightwells Auction in Addington in 2012 for £33,000. She now co-owns the mare with Paul and Wendy Dockley. The pair won the 2015 British Young Horse Championships in the 5-year old division and the 2018 CDI Nieuw en St. Joosland was their interntional show debut.

The pair felt the biggest competition from Dutch team rider Patrick van der Meer on his talented, powerful rising star First Apple, an 8-year old KWPN gelding by Vivaldi x Partout. He was second in the Prix St Georges with 71.4781%, second in the Intermediaire I (73.412%) and second in the Inter I Kur (76.950%).

The Joosland small tour featured a whole delegation of Asian riders who are assembling scores and ring mileage for the 2018 Asian Games in Jakarta, Indonesia in September. Nine riders from Japan, Thailand, Korea, and Taiwan.

Text and Photos © Astrid Appels - No Reproduction Allowed
Contact us if you are interested in obtaining photos for websites, social media and prints!