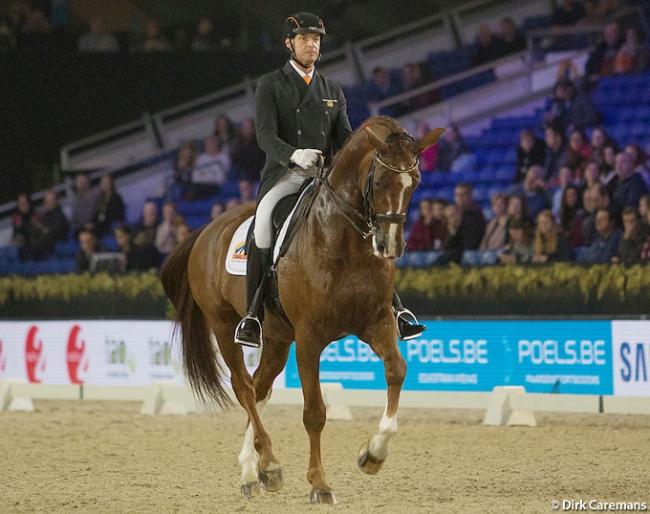 Dutch rider Patrick van der Meer swept the FEI level classes at the 2017 CDI Mechelen which is also known as the Jumping Mechelen Christmas show, taking place this year on 27 - 28 December 2017 at the Nekerhallen indoor exhibition center in Mechelen, Belgium. While Van der Meer scored three out of five trophies on two days, it was home side hero Jorinde Verwimp who snatched the victory in the Grand Prix Kur to Music.

Van der Meer brought his number one Grand Prix horse Zippo (by Rousseau) and rising small tour star First Apple (by Vivaldi x Partout) to Mechelen and in a rather small field of competitors he set the tone.

Just five small tour riders opted to compete in the Intermediaire I and the judges placed the Belgian based German rider Jennifer Reimer on the 10-year old Hanoverian stallion Daiquiri Royal (by Dancier x Wolkentanz) first. Reimer, who moved to Belgium for her veterinary studies at the University of Ghent, concluded her first year competing Daiquiri Royal at international small tour level with success. She scored 69.579% for the Inter I victory. Danish born Luxembourg rider Fie Skarsoe and Victoria Schönhofen's Rhinelander stallion Simple Choice (by Sir Donnerhall x Fidermark) placed second with 65.605%.

Van der Meer and his owner 13-year old big tour horse Zippo dominated a field of just 13 combinations in the Grand Prix by scoring 72.720%. He edged out Belgian Jorinde Verwimp on her 2016 Rio ride Tiamo, a 17-year old KWPN gelding by Lester x Hemmingway. Verwimp placed second in the Grand Prix with 70.900% and went on to win the Kur to Music with 76.800% ahead of Van der Meer who placed second in the freestyle with 75.135%.

"With three wins I can only be super happy," Van der Meer concluded after two days in Mechelen. "My two horses went very well. First Apple is only seven and it was difficult to ride a Freestyle which wasn't made for him. I had to ride with the brake on to stay together with the music. With Zippo I had some minor confusions in the Freestyle but I was most happy with my score in the Grand Prix, which allows me to stay in the Dutch A-team."

Verwimp was very happy with her win in the Kur. "I had much more control than yesterday in the Grand Prix and I'm delighted with my victory in the Freestyle," she said. "Tiamo gave me a great feeling. Next year my aim is the World Equestrian Games in Tryon and of course I would love ro ride in Mechelen. Tiamo will be 18 and it would be a great end of his sport career."