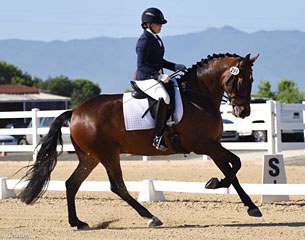 Anja Ibsen and the 5-year old Apollo ADP have been named the 2017 USPRE California High Point Series Grand Champions. Apollo is a bay stallion bred by Erin Lohec of Tassajara CA, and is the son of Erin’s former High Point champion Noble GF.

In their first year in the show ring, Apollo and his rider Anja Ibsen were regularly scoring well above the 70% mark at Training Level. With a High Point average of 72.62 from two shows, they were clearly unbeatable in the Open National Division.

This closes the 2017 High Point calendar for the CA and FL series. We also held a successful trial High Point challenge in North Carolina this year, and look forward to adding more shows next year.

The 2018 FL, CA, and NC Series’ shows will be announced shortly after the 1st of the year.