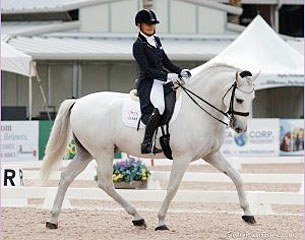 The 2016 USPRE Florida High Point Series held at Wellington's Global Dressage Festival was the biggest series to date. PRE growth in the Florida circuit is booming, helped along by breeding farms such as Yeguada Ymas, Las Moreiras and Hampton Green who brought top quality PREs and world-class riders to compete them.

Additionally, new pairs--as well as those who have participated in the High Points over the years--helped to make 2016 the most competitive and challenging High Point series to date.

The USPRE Dressage Committee, consisting of Janne Rumbough, Tina Lovazzano, Erin Lohec, Jacqueline Cuddy, Belinda Nairn and Kim Boyer, met in the fall of last year and selected 5 of the 7 Global CDIs as High Point shows, adding one more show than last year's series. This paid off with inc reasing numbers of P RE pairs throughout the winter, the greatest number showing in the final CDI (Week 12) of the GDF circuit.

The Winners for the 2016 Florida High Point are:

With over 25 PREs and 20 riders in the most competitive shows in the US, there were some notable highlights to report:

For all the amazing accomplisments and for more pictures, click here.

Related Links
Join the P.R.E. Community by Subscribing to the USPRE Catalog of Breeders and Breeding Stock
USPRE Announces Dates and Locations for 2016 High Point Series in California and Florida
2016 USPRE Week Celebrates the PRE Horse with Party and Educational Week in Wellington
California USPRE High Point Series Kicks Off for 2016