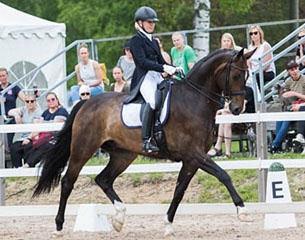 Pin Rock's Foxifire Blitz is a 9-year old Finnish warmblood bred by Tiina and Ira Ristimaki. He is by Fernet out of Rianne (by Caritas x Pele x Nimeton Ori).

He competed in a handful of shows under Saara Keihas, before Finnish international dressage rider Stella Hagelstam bought him a year and a half ago after she had posted a message on Facebook that she was looking to buy a home bred horse.

Hagelstam and Foxfire Blitz had their first big show together straight at the 2017 Finnish Championships in Ypaja in June, which they won after scoring 67.740% in the Grand Prix and 72.095% in the Kur to Music. Foxfire Blitz has not yet competed internationally.

"The whole journey with Foxy has been nothing but a pleasure," said Hagelstam. "We wish him and his new owner all the best in the future!"