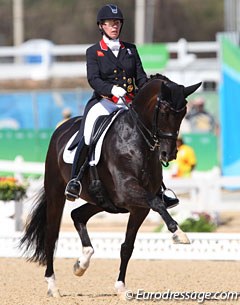 British Olympic team silver medal winning Fiona Bigwood is a busy bee with her recent move from Bourne Hill after acquiring the new building project at Brantridge Park. Rumours spread that the British rider is saying goodbye to her competition career. Time for some rumour control.

Bigwood and her top horse, the 12-year old Oldenburg mare Atterupgaards Orthilia (by Gribaldi x Donnerschlag), were seleced on the British team for the 2016 Olympic Games in Rio, where they won team silver and placed 17th in the Kur to Music finals (76.018%). At their last competition, the 2016 CDI Roosendaal Indoor, in December, they had to retire from the Grand Prix after the mare became too unsettled in the test.

Rumour has it that Fiona Bigwood is saying goodbye to her competition career and selling Orthilia. If the sale didn't go through, she would grant the ride to her husband, Danish team Olympian Anders Dahl.  Time for Eurodressage to check in with Fiona if this is true.

"I am definitely not stopping yet," said Bigwood firmly, setting the record straight. "I love competing. I wouldn't have bought Daytona if I was going to stop. There are no plans for Anders to ride Tillie this year. There were a few people interested in buying her but she is still with me."

In September 2016 Bigwood acquired the now 6-year old Oldenburg bred Daytona Platinum (by Dante Weltino x Charon). Last month she moved out of her yard Bourne Hill, which she sold to a show jumper, and relocated to Brantridge Park, which is a total renovation project where the entire equestrian part still has to be built.  Bigwood and Dahl had a small scare there at the end of December, when smoke came up from the basement. The local firefighters came on site but fortunately it only turned out to be a burst water tank.