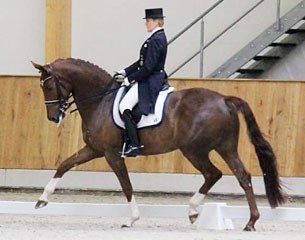 At the end of the two-day trip she found Fidelio van het Bloemenhof in Germany. Fidelio is a Belgian SBS registered gelding by Fidertanz out of Ommarilla de la Fazenda (by Jazz x Nooitgedacht), bred by Luc van der Heyden and owned by Michael Stroetmann.  He was originally named Decadent van het Bloemenhof.

The chestnut gelding was initially started in Belgium in the young horse classes under Manon Claeys in 2013. Then the horse sold to Germany and under Petra Stroetmann (née Epping) he made his German show debut in 2014 at L-level. In 2016 he moved to S-level and he did his last show under Stroetmann in February 2017 at S-level at a regional event in Una-Massen.

Fidelio van het Bloemenhof has now sold to Bigwood as a rising Grand Prix prospect. There was more interest in the horse from Holland, but Stroetmann declined that offer and sold to Bigwood instead.

"Fidelio was the last horse we saw on a two-day trip looking at lots of horses and, again, he just has Grand Prix written all over him," Bigwood told Eurodressage. "He does most of the work and has been beautifully trained with a very willing temperament so I am hoping that it won't take to long before we can compete nationally at Grand Prix." 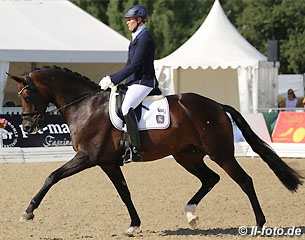 Bigwood's second purchase is the 7-year old Florina. Bred by Walter Droege, Florina is a Hanoverian mare by Furst Romancier out of Donna del Mondo (by Donnerhall). She was the German Elite Mare Championship in Lienen in 2013. Under Claudia Rüscher, the mare represented Germany at the 2015 World Young Horse Championships in Verden, where she won the consolation finals with 9.06 and then ended up in fourth place in the Finals with 8.82 points. One month later the mare also placed fourth at the 2015 Bundeschampionate in Warendorf, Germany.

In October 2015 Andreas Helgstrand bought Florina as a sales a horse and he has now sold her to Fiona Bigwood.

"Florina really stood out for me as she has the most amazing hindleg and natural talent. She also seems to have a very kind temperament," she said.

Bigwood has no immediate show plans with her horses as she and her husband Anders Dahl started a big renovation project at their new home, Brantridge Park.

"I struggle at the moment with having enough time for competing at the internationals but I still enjoy training them at home," said Fiona. "I hope that they both will make super Grand Prix horses."