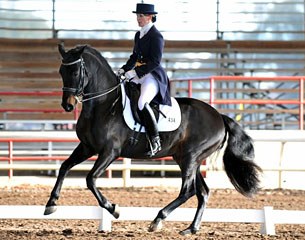 United States PRE Association is pleased to announce the winner’s of Copa USPRE 2017. This year, we were pleased to have winners in all categories with excellent results. New pairs participated this year from around the country, proving again the competitiveness of the PRE horse in all levels of dressage.

In order to participate in the Copa USPRE,  riders must achieve a minimum amount of scores at a minimum percentage to qualify.

Also new this year is the submission of scores from CDI competitions from several of the riders. Jacqueline Cuddy and Malcarat completed a first year in the international circuit maintaining their lead in the country at the Grand Prix. We look forward to the coming year with this talented pair now declared for the United States.

Also in the Grand Prix, Daturo II appears for the first time. Daturo is an imported PRE that has been brought up the national levels in the United States over the past few years and, now with Trisha Kerwin-Bell, has become a horse to watch for the future.

Stacey Hastings and Police, owned by Yeguada Coves-Darden, also completed their first year at Grand Prix in the national levels with promising results, bringing them nose-to-nose with Copa Champions in former years, Janne Rumbough and Junior (by Gaucho). 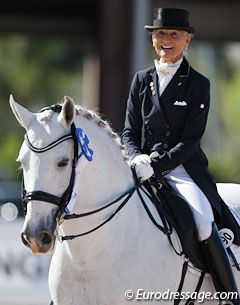 In the Small Tour, Janne and Armas Zumbel topped a competitive group, also with a combination of strong national and international scores. Newcomer to the Copa, Barbara Bonk and Centeno XII posted consistent scores at the two Small Tour tests to achieve Reserve.

In the FEI 6 Year Old division, Nicole Harrington and Camomila MCD are in the winners circle, after an exciting year of qualifying for both the USEF Festival of Champions and the USDF National Championship. However, they were bested in this competition by Kristin Mills and Maximo JCG. Both horses obtained desirable marks against difficult warmblood competition, and both horses were bred in the US!

Our only pair in the FEI 5 Years division, Alice Tarjan and Sueco II, topped the Young Horse scoring with a super competitive average of 7.593. We look forward to following this exciting young horse’s progress as it moves up the levels. Sueco II is an imported 2012 stallion bred by Las Cadenas.

Our Copa Champions and Reserves will constitute the USPRE Dressage Team for 2018, and are automatically invited to attend the SID Clinic in December in Wellington with USEF trainer Charlotte Bredahl.

An overview of the 2017 USPRE Copa Winners: