Winners of the 2015 Copa USPRE and Final Rankings 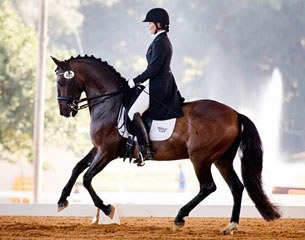 The United States PRE Association is pleased to announce the winners of its annual Copa USPRE (Breeder’s Cup) for 2015. The higher degree of difficulty in the directives for the Copa 2015 resulted in fewer pairs making the final ranking. We are proud of those pairs who were able to complete all of the requirements and who represented the PRE Horse with excellence in dressage competitions around the country. Congratulations to the Champions, and our thanks to all who competed as part of this year’s Copa USPRE.

The 2015 Copa Champions and Reserve Champions make up our 2016 USPRE Dressage Team. We are pleased to see Felicitas Von Neumann-Cosel, Nicholas Fyffe, Stacey Hastings, and Jacqueline Cuddy returning, plus newcomers Kerrigan Gluch and Katherine Breiner. 2015 USPRE Team members have had a great year with their horses and we are excited to have them back for 2016:

–Stacey Hastings returns this year with her highly successful Small Tour horse Police, owned by Coves-Darden, whom she introduced to international competition earlier this month at Dressage at Devon.

–Kerrigan Gluch and Vaquero HGF, in their first year together and first year at the Young Rider levels, were USEF Reserve National Champion and NAYJRC Bronze medalists.

–Felicitas Neumann-Cosel continues to move Aragon GAF up the levels with a successful first year at FEI 6 Year Olds. Additionally, Aragon GAF had notable placings at the Breed Show at Devon, winning the PRE Breed class and Reserve for the GAIG Mature Horse and the GAIG/USDF Stallion Champion class.

–Nicholas Fyffe introduced Fiero HGF to the FEI Small Tour national levels in Wellington this year as a seven year old, and the pair received scores above 70%.

This concludes the Copa USPRE for 2015, but kicks off a new season as of 1 October! For more information about the Copa USPRE and USPRE Dressage Team, see the Dressage Menu of this website.