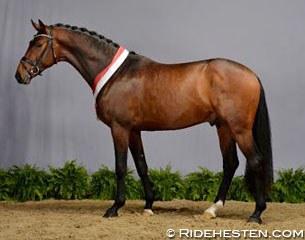 The 2017 Danish warmblood autumn stallion performance testing is set to begin on 23 October 2017 at the Torring riding centre. Twenty-five stallions are entered for the test and fifteen of them are dressage bred.

Of the group of 25 colts, 9 will be dressage tested, 7 will be show jumping tested and 9 will be tested in both disciplines. The stallions are tested for 35 days.

On the first day all stallions will be presented on hard surface, and vet checked before they are presented under saddle by their own riding.

The stallions already approved at the licensing and now entered for the dressage testing are:

Dressage bred colts that will be tested both in show jumping and dressage are: