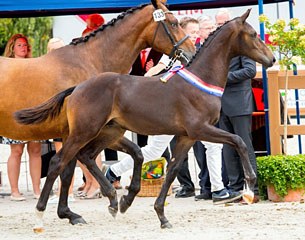 The black colt Metallic (by Franklin x Davino VOD) has been named 2017 KWPN Foal Champion on Friday 18 August 2017 at the KWPN Horse Days in Ermelo, The Netherlands.

Twelve foals were selected for the champion's ring to battle it out for the title and Metallic topped the ranking in which ten were placed. Toine Hoefs, chair of the selection committee, saidthat it was "a great group of foals, it was pure joy."

The committee named Metallic  the champion. Bred and owned by T. Tolner, Metallic is by Franklin out of Indiana Jones (by Davino VOD). The colt was praised for being "long lined with an uphill conformation and an extra trot and canter."

Madison (by Ferdinand out of Elsarina (by Jazz) was named reserve champion. He is bred by J. Zeewuster and the heirs of JS de Jager.