Ratina B Named Champion of the 2017 Westfalian Elite Mare Show 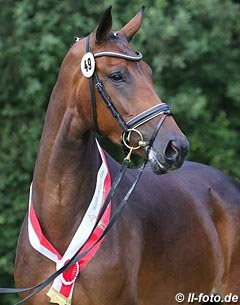 Heiner Beringmeier's bay mare Ratina B has been named champion of the 2017 Westfalian Elite Mare Show held in Munster-Handorf on 29 July 2017.

After already winning the 2017 German Mare Championship in Lienen less than a month ago, Ratina B also freewheeled to the title at Westfalian Mare Championship. She is by Rock Forever out of Camira B (by Contini) and is bred and owned by Heiner Beringmeier.

Reiner Bockholt's Frida Gold RB (by Furst Fohlenhof out of Little Diamond (by Lissaro van de Helle)) was named the reserve champion in Munster. In Lienen two weeks ago she was already fourth.

The third ranked mare was Estelle (by Escolar out of Roxanne (by Rock Forever)). She is bred and owned by Niklas Schulte-Märter.