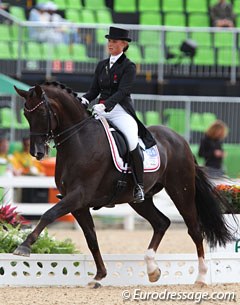 Danish Olympic team rider Anna Kasprzak has withdrawn her number one Grand Prix ride Donnperignon from the 2017 Danish Championships, which is the first mandatory observation and selection trial for the 2017 European Championships.

Kasprzak's 18-year old Finnish warmblood Donnperignon (by Donnerhall x Mozart) recently underwent several teeth extractions. A routine check earlier this week revealed a broken tooth that had to be removed to avoid infection. Upon closer inspection, it turned out that "Pepe" had two additional bad teeth in his mouth that Anna and the veterinarian agreed to remove as a preventive action.

"We all know what toothache can do to ourselves, thus this was not a difficult decision," said Anna. "We find that it is better to give Pepe some time now without bits in his mouth, despite that it implies that he will miss the Danish Championships, than to leave the teeth in his mouth with the risk that he will get affected later this summer, and miss the chance of being submitted to the Danish team for the European Championships. A strategy that our national chef d'équipe, Kimi Nielsen, and coach, Princess Nathalie, fortunately supports."

Anna and Donnperignon won silver at the 2016 Danish Championships, which are annually held at Broholm castle. In 2015 they won the title.

Anna will ride her rising Grand Prix horse Rock Star in the Big Tour Championships in Broholm. She will also take along her new ride Quarton for the Small Tour Championships and compete her 7-year old Danish mare Romanova (by Romanov x Danone) in the M-level division.