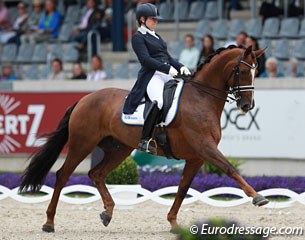 Happiness is a 2005 born Hanoverian mare by Hochadel x Walt Disney. She is bred by Heike Oetjen.

Michelle Hagman has been competing Happiness for the past 2.5 years and produced excellent results, which secured them a spot on the Swedish A-team. Their run for a team place at the 2017 European Championships in Gothenburg has been aborted as the rising 32-year old Hagman is pregnant with her first child.

Albert Sprehe, who had bought Happiness from Hans Rueben to secure the horse for his stable jockey, decided to resell the mare due to her pregnancy. Hagman no longer feels comfortable competing and riding at stallion shows in her condition. She will be back in the saddle the earliest by September 2017 and with Happiness now being in top shape, Sprehe believed it better to sell the mare. When Hagman returns to riding, she can focus on Sprehe's large string of 7 to 9-year olds who need to be readied for Grand Prix next year. 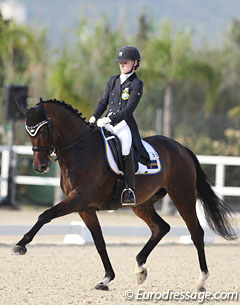 The 21-year old Tovek picked up Happiness in Sweden on Thursday 2 March. She wants to ride the mare on the Swedish Under 25 circuit this year.

"It's going to be exciting to see what the future has to offer with the lovely Happiness," said Tovek.