Allison Brock's Rosevelt Getting Back in Shape for 2017 Show Season 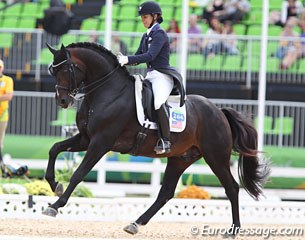 American Olympic team bronze medal winners Allison Brock and the Kundrun's Hanoverian stallion Rosevelt are the only pair of the team which haven't made a competition outing yet since the Games last August. After a long break Rosevelt is now back in training and getting ready for his competition debut in the spring.

"He had a long break after Rio and I've been legging him up," Brock told Eurodressage. "He's in full work but not quite fit enough to be out showing yet, and I won't bring him out unless I am 100% convinced he's ready."

The American fans expected Brock and Rosevelt to go head to head with his other three team members at the most important show of the Wellington season, the CDI 5* held on 9 - 12 February 2017, but only Peters, Graves and Perry-Glass were there. 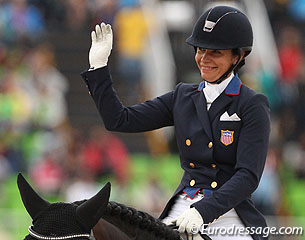 "I'm very disappointed to not be competing with my team mates but I'm on Rosie's schedule," Brock explained. "I try to listen to him and respect what he's telling me. Initially I thought he'd be ready this week but I think he needs at least another month. He'll be out when he tells me he's ready."

Rosevelt is a 15-year old Hanoverian licensed stallion by Rotspon out of Lore (by Lauries Crusador xx). Fritz and Claudine Kundrun acquired the dark bay stallion from Eugene Reesink in 2010 and after spending time in Sweden, where he was trained and stood up for stud at Jan Brink's yard, he moved to DeerMeadow Farms in Keswick, VA, USA under the care of Brock.

The 37-year old Hawaiian born Brock started out as Sue Blinks' groom and took over the position as head rider for the Kundruns at the end of 2004 when Blinks moved to the West Coast. Brock trained with Blinks, Brink and Kyrklund and took Rosevelt to the top. They were selected on the 2016 U.S. Olympic team and earned team bronze and a 15th place in the Kur to Music finals. 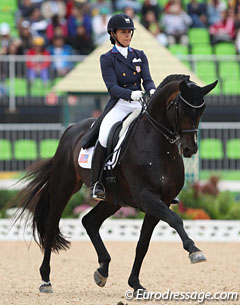 Brock has no immediate successors for Rosevelt after the retirement of Schumacher and the tragic death of the 5-year old mare Grazia (by Totilas x Florencio) from lymphoma at the beginning of January. However, there are four 3-year olds, all by the Kundrun's KWPN stallion Ampere, lined up. The Kundrun's acquired the Westfalian licensed stallion Schumacher (by Stedinger x Weltmeyer) from Antonius Averdiek-Schulze after the black won bronze at the 2010 World Young Horse Championships in Verden. Brock went on to win the British International 6 year old Championship on him.

"Schumacher is retired," said Brock. "He has an eosinophilic disease that is only controlled with systemic steroids. We also have a son of Schumacher that has the same disease so for sure its genetic. It's incredibly rare." 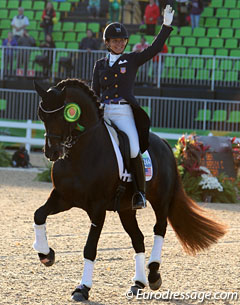 As Rosevelt will soon make a come back and with youngsters in the pipeline, the Olympian has a bright future ahead of her. Allison has also recently been submitted to the U.S. Equestrian Dressage Elite Program.

"My dreams as a rider would be to ride at Aachen and a World Equestrian Games, and of course make it back to the Olympics," said Allison. "I would love to be able to develop more international Grand Prix horses."