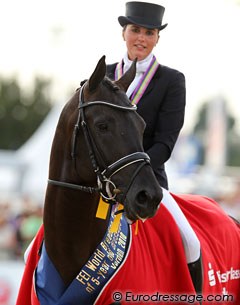 Scholtens and Astrix had a very strong ride in the finals, in which the activity and swing in the trot were outstanding. The black non-licensed stallion has excellent cadence and tons of suspension.

The medium trot was engaged and ground covering, though Astrix has a slight tendency to pull the right hock a bit higher in the lengthening. The half pirouette in walk lacked some impulsion, but the medium walk was excellent with superb overtrack and relaxation in the back. The canter is great, though there was a few minor issues. The first medium canter was definitely an extended canter, which is too much for what is required in the test. Nevertheless it looked great, though the second medium was a bit rushed. Astrix lost his balance and collection in the first counter canter, getting too long in the frame, but the left counter canter was better. Compared to her ride on Westpoint last year, the Schijndel based Scholtens had a much better contact with the bit. On Astrix the lively Emmelie had less pressure on the mouth and kept her stallion more open in the throat latch.

The panel of judges, consisting of Mrs Baarup (DEN), Mrs Colliander (FRA), Mrs Sanders-van Gansewinkel (NED) and Mrs Zang (USA), praised Astrix for his "good activity and uphill tendency in trot" (9.3) the good rhythm in the walk (9.5), and the "uphill canter, which was a little bit too hasty in the first counter canter" (8.9). With 8.9 for submission and 9.3 for general impression, Astrix and Scholtens totaled a winning score of 9.18. 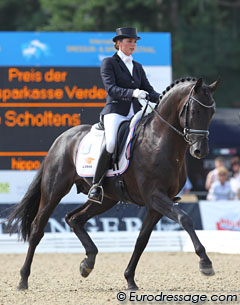 Unfortunately during the prize giving ceremony, Scholtens and Astrix were unable to do a lap of honour as the black stallion took a wrong step and became unlevel. Scholtens left the ring in walk.

"It's amazing. I think nobody expected it from this horse," Scholtens confessed at the press conference. "You never know if you're going to win. On Thursday he was pretty great and today he was amazing and won. I'm so so happy."

The black stallion was previously competed by Marie Jose Hulsman, who showed him in the 2009 Pavo Cup Finals. However, in April Scholtens received a phone call from owner Perlee Stables to ask if she wanted to ride him in the Dutch World Championship selection trial. She took the offer with open hands and five months later they became World Champions.

"Next week we have the Pavo Cup and that will count as a selection trial for the World Championships next year," Scholtens explained. Looks promising! 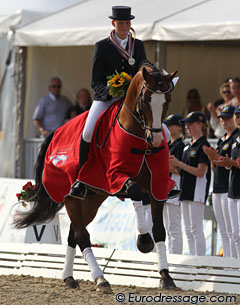 The cute bay stallion Lissaro, which sold to Belgium at the Verden Stallion Auction as few people were interested in a dressage stallion with show jumping bloodlines, was certainly one of the stars of the 5-year old division. Rüscher kept her stallion energetic in trot with an actively engaged hindleg. The walk pirouette was mediocre but his extended walk was phenomenal : relaxed with much overstep. In canter he showed brilliant uphill strides and good lengthening in the medium canter. There was much collection and self carriage in the counter canter. The stallion got a bit tired and lost some impulsion towards the end of the test, which showed in the slow simple changes, but they still finished the ride with an expressive trot on the long rein. Besides the super canter, Lissaro van de Helle excelled with his tremendous rideability and left an impression with his super attitude as he was cool and relaxed during the hustle and bustle of the prize giving ceremony. 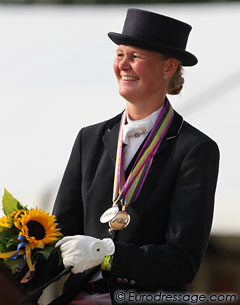 The judges applauded Lissaro's "good active trot and nice medium trot with a lot of self carriage" (8.9). The "smooth contact" in walk and him moving "through the body" earned the stallion a 9.5. The "power and lightness" in canter were good for 9.0. The judges then confused the crowds by stating that the submission was a 9.4, but then apologized on the microphone and changed it to a 9.0. With another 9.0 for general impression the Hanoverian averaged 9.08, which was received with a whistling concert and booing from some people in the crowd.

Aboard Antonius Averdiek-Schulze's Westfalian licensed stallion Schumacher (by Stedinger x Weltmeyer) Rüscher also finished in bronze medal position. The black stallion does not have the prettiest conformation, but he has a powerful movement mechanism.

Coached at the show by Carola Koppelmann, Rüscher had "Schumi" moving quick and rhythmical from behind. There was a small loss of rhythm in the second medium trot and some loss of impulsion in the turn on the haunches. The medium walk was huge and relaxed (despite an unsettling cough). The relaxation and control in canter were fantastic and Schumacher was very willing and obedient in all the canter movements. The medium canter was well regulated, only in the simple change the combination left the track. 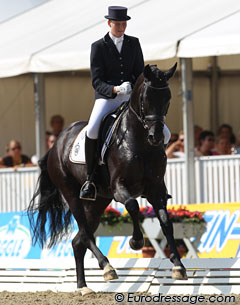 The judges rewarded Schumacher a 8.9 for his "trot with active hindleg and lots of shoulder freedom." The correct and active rhythm in walk earned them a rather low 8.0, whereas the "nice, fluent, cadenced and balanced canter" was good for a 9.2. With 8.9 for submission and general impression, Schumacher ended up with 8.76 and the bronze medal.

"It's my first time at the World Championships and it was amazing to be nominated with two horses," Rüscher admitted. "I didn't have high expectations, but I first had two good rounds was surprised with myself that got into the finals. I never counted on a medal."

When asked what the major difference is between her two horses, she said that Schumacher is more prone to tension than Lissaro. "Schumacher pays attention to everything, while Lissaro is more quiet, more cool." 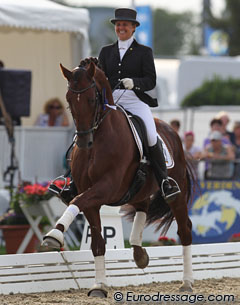 After having finished second in the preliminary test, Uta Gräf could have pulled it off winning a medal if her Rhinelander stallion Damon Jerome H (by Damon Hill x Guy Laroche) had been a bit fresher and electric in the finals.

This delightful pair, which was truly a crowds' favourite, showed lightfooted elegant trotwork, which lacked a bit of swing in the back. The lightness in the contact, balance and constant uphill frame were incomparable to what other had shown today. The medium walk was super in rhythm and ground cover. In canter the self carriage was fantastic and the lengthenings were well done. Damon Jerome H lacks some natural elasticity in his legs as he got a bit stiff in his canter mechanism. The ride was absolutely fault-free but it was like champagne without bubbles.

The judges were thrilled about the horse's walk (8.9) and loved the "lightfootedness and good balance" in trot but wanted to see "more swing the extensions" (8.7). In the canter they recommended the balance but the horses need to more "loose and over the back" (8.5). Damon Jerome H probably had the best submission of all horses shown today. The contact with the bit was fantastic and the panel of four awarded that with a 9.0. With another 8.6 for general impression, Gräf averaged 8.74 to finish fourth.