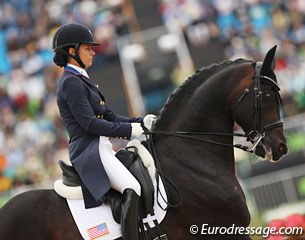 The US Equestrian Dressage Sport Committee has approved requirements for the Elite Program in 2017. The first four U.S. Grand Prix riders have been submitted to the Elite Program, which in Europe can be compared to benefits A-squad riders get.

The newly-launched Elite Program is established to provide support and resources to athlete/horse combinations that have proven they are internationally competitive. The US Equestrian Dressage Technical Advisor and Managing Director oversee the program with oversight provided by the Program Selectors and the Dressage Sport Committee. Combinations qualify for the program based on scores received at CDI3*/CDIO3* or above competitions in the last 12 months.

The "Elite Program" is very similar to what is offered in Europe to riders who qualify on a Grand Prix A-squad or elite/Olympic squad.

The American athletes will work with Technical Advisor Robert Dover to set goals and determine schedules. Athletes will receive training grants and other support to assist them in reaching their agreed upon targets. They will also have access to educational opportunities and logistical support. Being or not being part of the program has no impact on selection for Games and Championships.

“In the last four years, our goal was to create a very strong machine that would produce an Olympic medal for our dressage team, and the next four years will be spent continuing on that momentum and increasing the number of top combinations in the United States,” Dover said.

The first U.S. athletes to be submitted to the elite program are the American 2016 Olympic team riders: