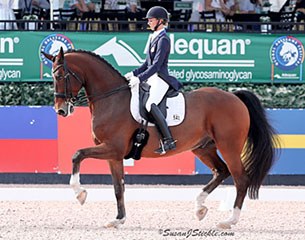 2016 Olympic team bronze medalist Laura Graves (USA) and Verdades won the Grand Prix CDI-W on the opening day of the third week of the 2017 Global Dressage Festival in Wellington, Florida. On Thursday 26 January 2017 the second CDI of the Florida show season kicked off and while this time the small tour classes were small, the Grand Prix field was totally action packed with 28 combinations at the starting line.

Coming in on the top of the leader board in the Grand Prix CDI-W was Laura Graves and Verdades, a 2002 Dutch Warmblood gelding (by Florett As), earning an impressive score of 76.660% and a standing ovation from spectators.  This was the pair’s first time in the show ring since the 2016 Rio Olympics in August and the tall bay gelding was a bit ring shy after an incident with the sprinkler system during a training session in the main arena on Tuesday. The corners proved to be a bit of a challenge for the come back pair.

”He’s notorious for being super sensitive. I was really thrilled about how he came out and he schooled super, and then went through the test really trying his best,” said Graves. 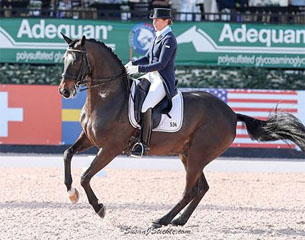 Graves was very pleased with her first competition ride of the year. "This is now his (Verdades) fourth year doing the big tour, and if I’ve learned anything, it’s that you have a plan and you also have ten other plans. He’s a super honest horse. His pirouettes can always be very good. I thought he was very rideable in those today. His half passes were nice."

With no major continental championships in 2017 for U.S. riders, the World Cup Finals on home turf in Omaha are considered the year highlight for many American equestrian athletes. Graves has also set her sights on qualifying for Omaha. “I really hope to qualify for the World Cup Finals. Hopefully because it is so close, we can make it happen this year!” 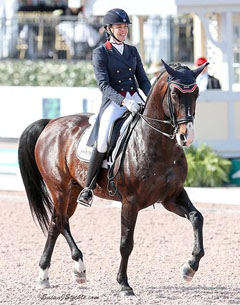 Placing second was Tinne Vilhelmson-Silfven (SWE) and Paridon Magi, a 2003 Swedish Warmblood gelding (by Don Primero x Napoleon) owned by Lövsta Stuteri, with a 75.080%. Third place was awarded to Charlotte Jorst (USA) and mount Nintendo, a 2003 Dutch Warmblood stallion (by Negro x Monaco) with a 73.080%.

Fourth place finishers Kathrine Bateson Chandler (USA) and Alcazar, a 2005 KWPN gelding (by Contango) owned by Jane Forbes Clark, were awarded the only 10 of the day, on their final halt from Judge Christoph Hess (GER) at E. Bateson was visibly very emotional at the end of her ride, bursting out in tears while leaving the arena. Half a year ago, Alcazar had to undergo emergency colic surgery at the 2016 CDIO Aachen and gave his entire team an incredible scare. The black gelding is now back to full fitness and made his CDI debut in the World Cup Grand Prix in Wellington.

"I can't quite believe he's back," said an ecstatic Bateson. "Personal best. What a heart this special horse has. I can't express how emotionally happy I am and how much I thank everyone for all their amazing support through the really tough times." 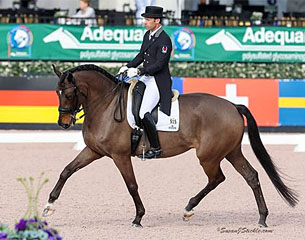