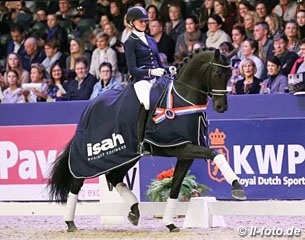 The 2016-2017 KWPN Stallion Competition circuit included three qualifiers held in December and January and the Finals at the Licensing in Den Bosch. Points are earned at all shows and the winners of the finals are not automatically the winners in the overall ranking. This year the Finals were extremely exciting as twice there were different day winners compared to the overall champions. The finals were judged by Karin Retera and Arie Hamoen.

In the L-level division Dinja van Liere and the German bred Total U.S. (by Totilas x Sir Donnerhall x Don Schufro), bred by Paul Schockemohle, became the day winner with 87 points and second in the final standing. Judge Retera remarked that the length in the neck had to improve The horse scored 9s for walk and canter. and 8.5 for trot. Marieke van der Putten and the Brandenburger bred Trafalgar (by Totilas x Lord Loxley) scored 83 points with 8s across the board to place second, but he booked the overall victory in the final standing. The third placed pair was Dana van Lierop on the German bred Daily Diamond (by Daily Deal). 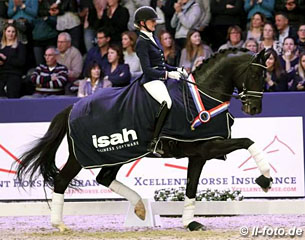 In the M-level division the day victory went to Adelinde Cornelissen on the KWPN bred Governor (by Totilas x Jazz) with 86 points. However, Marieke van der Putten and the Hanoverian bred Toto Jr (by Totilas x Desperados) took the overall victory but placed second in the final.  Kirsten Brouwer and the quite tense bay KWPN stallion Guardian S (by Bodyguard x Trento B) landed only fifth place in the finals with 82 points, but overall they were second. Governor finished third in the final standing, followed by Swedish Anna Blomgren on the KWPN bred Glamourdale (by Lord Leatherdale x Negro) who was third in the Finals and fourth overall. 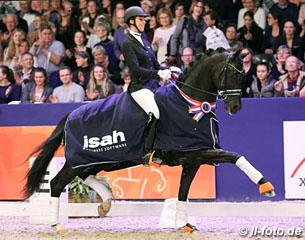