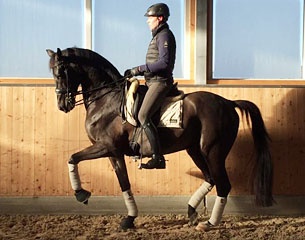 Etoine, the champion of the 2012 KWPN Stallion Licensing, has been sold to Tinne Vilhelmson-Silfven's long-time sponsor Antonia Ax:son Johnson. The now gelding spent four years in the U.S.A before returning to Europe to be trained to Grand Prix level by Finnish Henri Ruoste.

Etoine (by Vivaldi x Balzflug x Amor) is bred by S.P. de Lange and was owned by Ad Valk, Tom Coomans and Tineke Bos at the time of the KWPN Stallion Licensing. Carolyn de Roo acquired the young stallion at the KWPN Select Sale and resold him to American Anne Schmidt of Tam Farm Dressage in Vermont.

Etoine was shipped to Florida in the autumn of 2012 for training. There he was named Emeici and got gelded. One year ago Henri Ruoste and his business partner, German Jochen Arl, acquired Etoine and shipped the horse back to Europe. Ruoste has been training the black for the past year and the 7-year old is now schooling all Grand Prix movements.

"Etoine hasn't competed that much yet, and we are really looking forward seeing this amazing horse in the future with one of the best riders in the world," Ruoste told Eurodressage. "I tried him in the U.S. and he was shipped over to Europe to be sold. Jochen and I were so impressed of the pure talent and ridability of Etoine that we ended up buying him ourselves."

"We are so happy to be able to match the right rider and owner to all these talented horses," said Arl. "We still have several more world class quality rising Grand Prix horses of the same calibre in training at the moment."

Swedish Olympian Tinne Vilhelmson-Silfven, who is currently competing in Wellington, Florida this winter, is thrilled to have added Etoine to her string of horses. The horse arrived in Florida on 2 February 2017.

"I think it's an extremely exciting horse, high quality and great ridability," Tinne told Eurodressage. "He is very athletic. I look forward to start working with him."