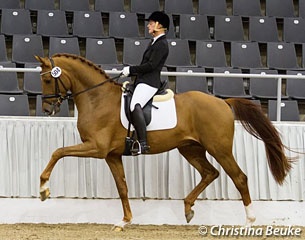 Four foreign bred dressage stallions have been accepted for breeding for the Hanoverian society following the 2017 Hanoverian Stallion Approval in Verden, Germany, on Tuesday 24 January 2017.

Fourteen stallions in total were entered for the approval, five dropped out (Ironman, Feinrich, Touchdown, Zafferano) and six in total were accepted. Of those six, four are dressage bred.