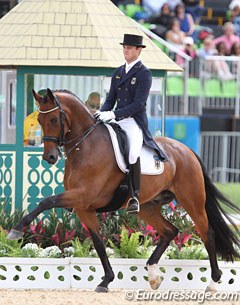 Ralph Westhoff has acquired a 50% ownership share in Sönke Rothenberger's Olympic team gold medal winning horse Cosmo. The German business mogul has now secured Cosmo for the German team as well as young Rothenberger's future on one of the biggest shooting stars in the Grand Prix dressage world.

The 22-year old Rothenberger and his gifted 10-year old Dutch warmblood gelding Cosmo (by Van Gogh x Landjonker) experienced a stellar rise on the international elite show circuit. After winning team gold at the 2014 European Young Riders Championships in Arezzo, Italy, the pair jumped to Grand Prix level. In 2015 the horse won the Otto Lörke Prize for being the most successful rising Grand Prix horse in Germany. In 2016 the pair was selected on the German team for the 2016 Olympic Games in Rio de Janeiro, Brazil, where they won team gold.

The show jumping bred Cosmo was discovered as a youngster by Sven Rothenberger at Bert Rutten's yard in The Netherlands. The horse's talent made Sönke switch back from show jumping to dressage. The pair is considered one of the biggest medal contenders for upcoming (inter)continental championships in the future.

In order to secure the horse for Germany and Sönke to ride, owner Sven Rothenberger went in search of a sponsor and found one in Westhoff, who is the managing director of the Kraiburg corporation which processes and sells rubber products all over the world. The company has 2000 employees and achieves an annual turnover of approximately 500 million euro. 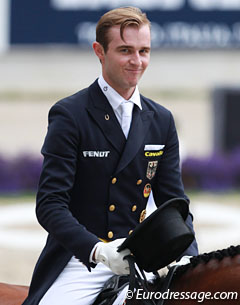 In November 2016 Westfhoff already purchased the 7-year old Sankt Anton (by San Amour x Ruhmann) for Sanneke Rothenberger to ride and at the turn of the year he added (a part of) Cosmo to his horse band.

"Since 2017 Ralph has became co-owner of Cosmo," Gonnelien Rothenberger told Eurodressage exclusively. "Marga and Ralph made sure that Sönke will be able to focus fully on sport in the future. They also have given Sanneke a fun, new challenge for the future. Now we are no longer embarrassed to have to decline a major offer and potentially sell Cosmo."

Gonnelien added that "when it comes to really high amounts, even for us it is a very hard decision whether to keep the horse or not. For instance Van Vivaldi we had to let go. This exceptional stallion would definitely have been a very good horse for our kids in the future."

Westhoff also owns the Grand Prix horses Bonzanjo and Florenciano, which he recently moved from Marc-Patrick Fritz to Eyal Zlatin's stable. His wife Marga Groeninger manages the horse part in the businessman's life.

"It is correct that we participated in (the ownership of) Cosmo because wee are impressed by the combination Cosmo and Sönke and believe in their future," Groeninger told Eurodressage. "Both need time and peace to mature together. Aside from that we are closely connected to the family as friends with the same goals." 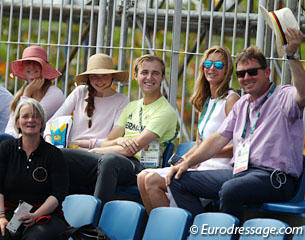 Aside from the mandatory team selection trials, Sönke will be competed at the CDI Hagen Horses & Dreams and one further outdoor competition this 2017 show season.

"The goal is to reconquer a spot back on the German team," said Rothenberger.

The rumoured share for the half ownership is 6 million euro.