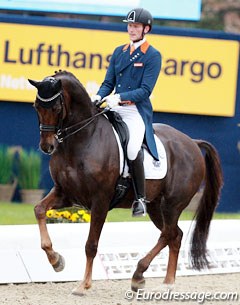 Bonzanjo is a 10-year old Dutch warmblood gelding by Jazz x Contango. He is bred by the late Huub van Helvoirt and was owned by the Van Silfhout family in partnership with Nol Gerritsen. He is the full brother to Hans Peter Minderhoud's former Grand Prix horse Tango.

Diederik van Silfhout trained Bonzanjo from young horse level to Grand Prix and became the 2015 Dutch Indoor Grand Prix Champions. The duo made its international Grand Prix debut at the 2014 CDI Drachten. They last competed at the 2016 CDI-W 's Hertogenbosch in March, where they finished third in the 4* Grand Prix.

Bonzanjo has now sold as Grand Prix ride for German rider Marc-Patrick Fritz, who will go in training with Van Silfhout to get to know the horse better before competing it at Grand Prix level.

"In good agreement with Nol and Jeannette Gerritsen the top horse Bonzanjo sold," Van Silfhout stated. "Bonzanjo will continue his career under a different rider. Bonzanjo and Diederik had beautiful years together and booked many successes."

A wild rumour has it that the horse sold to Matthias Rath, but Gestut Schafhof was unavailable for comment.