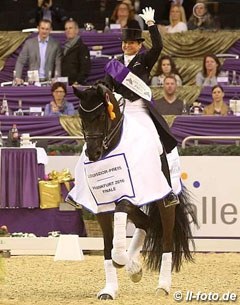 Not title favourite Heuberger but the warm-up round's runner up Sammy Davis Jr became the winner of the 2016 Louisdor Cup Finals for German Developing Grand Prix horses held during the 2016 CDI Frankfurt in Germany on Sunday 18 December 2016. Dorothee Schneider steered the black Bavarian stalion to victory with a winning score of 75.440%.

Schneider and Matthias Herbert's 10-year old Sammy Davis Jr (by San Remo x Wenckstern) placed first with three of five judges and finished on the day's high score of 75.440%. They only had a small mistake in a flying change in between the pirouettes. This is Schneider's second Louisdor Cup title after winning her first in 2011 on her 2012 Olympic ride Diva Royal.

"He wanted to show what he could do," Schneider said about the small mistake in her test. "Sammy is a very interesting horse in his way of moving. He's very intelligent and learns quickly. Each day it's fun to ride him."

Norwegian Isabel Freese on Paul Schockemohle's 9-year old Hanoverian Sam's Ass (by Samarant x Pink As), who posted a score of 75.300. For Freese had a very successful weekend in Frankfurt, winning the 2016 Nurnberger Burgpokal title on Vitalis on Saturday and becoming 2016 Louisdor Cup reserve champion on Sam's Ass. The horse's name might sound poorly chosen for an international career, but in German "Ass" means 'ace'.

The title favourite was Anabel Balkenhol on the 9-year ol Trakehner stallion Heuberger (by Imperio x Michelangelo). The pair won the warm up round but dropped to 6th place in the Finals with 68.740 after the dark bay stallion spooked.

"Heuberger has shown this weekend what he can do," Balkenhol commented afterwards. "He's a young horse and can still get impressed by his surroundings."