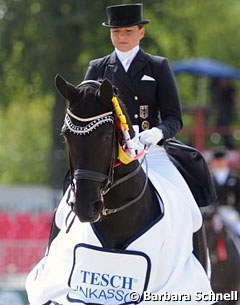 Dorothee Schneider and the black Hanoverian mare Diva Royal (by Don Frederico x Warkant) reigned supreme in the 2011 Tesch Inkasso Cup Finals for upcoming Grand Prix Horses held at the 2011 CDN Turnier der Sieger in Munster, Germany on Saturday 27 August 2011. Schneider won the warm up Intermediaire II with 75.150 % as well as the finals test, the Short Grand Prix, with 76.585%.

The black mare Diva Royal is owned by Schneider's student Stella Charlott Roth who has been competing the mare in the Under 25 competition. Schneider has been instrumental in the progress of the horse as she rode it to a 2009 Nurnberger Burgpokal Finals qualification and helped it to Grand Prix level for owner Roth to compete it at the 2010 European Young Riders Championships and this year the Under 25 classes.

"Come rain come sunshine Diva Royal always goes and has tremendous cadence. She really is a diva," said Schneider. Dorothee will have to give the mare back to Stella Charlott who wants to compete her in the Piaff Forderpreis Finals in Stuttgart in November 2011. 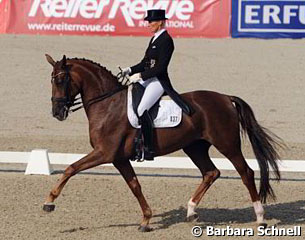 Brigitte Wittig and the 2009 Nurnberger Burgpokal winner Blind Date (by Breitling W x Donnerhall) were the reserve champions in the Tesch Inkasso Cup. The chestnut mare, which is owned by Christian Heinrich and Wolfram Wittig, has been competed sparsely but each time she comes out she's in front. With mistakes in the one tempi's, Wittig and Blind Date finished second with a 73.463 % earning finals' test.

"I would be stupid not to be happy with such a result," Wittig commented after her ride.

Oliver Oelrich and the bay Hanoverian gelding Floris (by Furstenreich x Drosselklang) were third with 71.268% Oelrich has been preparing the horse for Grand Prix level in assignment of his new rider, Swiss Marcela Krinke Susmelj who will be taking over the ride next year. "It was planned this way from the start," said Oelrich. "I'm proud in the way the horse developed itself the past few months." 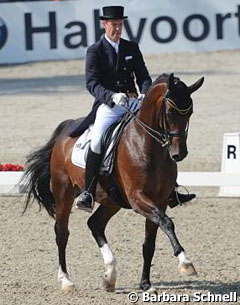 Head judge Klaus Ridder was ecstatic about the quality of this year's finals. "Such a collection of top horses you seldom see at a competition. This was genious sport. Dorothee Schneider had a world class performance and the second and third placed pairs would have won at any other shows."

The future of the Tesch Inkasso Cup is still uncertain. The class was initially sponsored by HKM Equestrian tack and then by the company Medien Cup which went bankrupt. Tesch Inkasso took over for 2011 but nothing is definite yet for 2012. "It all depends on our management and the German Equestrian Federation," said Sabine Tesch about the future of the series. "We have to get in touch with our partner En Garde, but we had super experiences this year and we'll start negotiations with a positive feeling, said FN marketing manager Georg Ettwig.

The Upcoming Young Horse Grand Prix circuit is a mega success as current German team horses Dablino, El Santo, Donnperignon and Damon Hill were all finalists or winners in this show series.