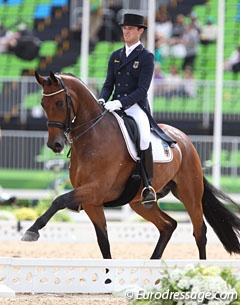 The shortlist for the FEI Awards 2016, the Oscars of the equestrian world, will be unveiled by the Fédération Equestre Internationale (FEI), the world governing body of equestrian sport, this week.

The FEI Awards, launched in 2009, put the spotlight on the men, women, young people and organisations that are making outstanding contributions to the development of equestrian sport. As we celebrate the elite performers and honour the excellence, commitment, dedication and courage of our athletes and their connections, stay tuned on the FEI social channels daily to check out the outstanding list of contenders.

FEI Solidarity – for an FEI Solidarity or equestrian development project, an individual or organisation that has shown skill, dedication and energy in expanding the sport.
Nominees are Mohamed Khalifa (EGY) , Kylie Shepherd (Equestrian Performance - ZIM), and Prince Moulay Abdellah Alaoui (President of the Royal Moroccan Federation for Equestrian Sports)

Against All Odds – for a person who has pursued his or her equestrian ambitions despite a physical impairment or extremely difficult personal circumstances.
Nominees are Rodolpho Riskalla (paradressage BRA), Manuel Franke Bertolotto (jumping CHI), Hannah Francis (eventing GBR), Pepo Puch (paradressage AUT).

Best Athlete – for the athlete that, over the past year, has demonstrated exceptional skill on the field of play and taken the sport to a new level.
Nominees are Isabell Werth (dressage GER), Nicholas Astier (eventing FRA), Nick Skelton (jumping GBR), and Sophie Christiansen (paradressage GBR).

The FEI Awards Gala 2016 will be held at the Prince Park Tower Hotel in Tokyo (JPN). Joint-MCs for the evening’s celebrations will be Liz Price (GBR) and the Athens 2004 Olympic hammer champion Koji Murofushi (JPN), who is now Sports Director for Tokyo 2020. Over 350 guests representing National Federations, equestrian sport fans and the FEI’s partners from around the world will join in the party atmosphere as they celebrate the achievements of the 2016 FEI Awards winners.