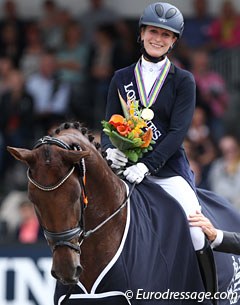 After four years on the job as Isabell Werth's head assistant trainer, Beatrice Buchwald will be leaving Werth's yard in Rheinberg, Germany, at the end of the year. Buchwald will begin working independantly at the yard of her sponsor, the Austrian Manfred Hödl.

The 27-year old Buchwald originally came to Werth's yard in 2012 after having worked for Johann Hinnemann. Ten months after her arrival in Rheinberg, she took over Matthias Bouten's number one rider's spot in the yard and was allocated the best upcoming horses in the barn. She made her big international break through on the Oldenburg mare Weihegold, which Beatrice brought along from Johann Hinnemann's barn to Werth's place. As the mare was getting better each month during the winter of 2015-2015, Isabell Werth climbed on board and the results are known: team gold and individual silver at the 2016 Olympic Games in Rio.

While riding Werth's horses, Beatice always upheld a good working relationship with Manfred Hödl for whome she continued to ride Lord Carnaby, Den Haag and the 5-year old Luiz Gustavo. Buchwald will be taking one Grand Prix horse, Daily Pleasure (by De Niro) with her to Hödl's new yard in Rhineland, which is only half an hour drive from Werth's.