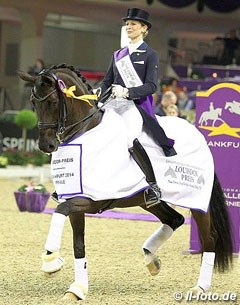 The black Don Schufro x Sandro Hit mare is taking Germany by storm. A year ago she won the Developing Prix St Georges horse championships at the same location, in 2014 the black mare was introduced to Grand Prix level and even once competed by coach Isabell Werth to upper seventy percentage scores. Buchwald and Weihegold are both newcomers to Grand Prix level but it doesn't show.