Imperio, Trakehner of the Year 2016 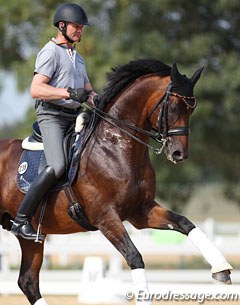 The German A-team listed Grand Prix horse Imperio will be proclaimed Trakehner Horse of the Year 2016 at the annual Trakehner Stallion Licensing in Neumunster, Germany, on 20 - 23 October 2016.

Imperio is bred by Hartmut Keunecke from Strasbourg and he became the reserve licensing champion as a 2,5 year old. He was the 2008 Bundeschampion and won silver at the World Young Horse Championships under Anna Sophie Fiebelkorn and moved into training with Schmidt to take him to Grand Prix. Imperio is owned by the syndicate of the Schwaiganger state stud, the German Olympic Equestrian Committee (DOKR) and Schmidt.

As a breeding stallion Imperio made his mark with offspring such as the licensed stallion and rising Grand Prix horse Heuberger (Anabel Balkenhol). Imperio is approved for breeding with Hanover, Oldenburg, Westfalen, Rhineland, German Sport Horse, and the Danish and Swedish warmblood.

In 2015 Imperio was already named Trakehner Stallion of the Year.