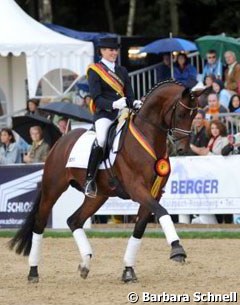 As soon as the 5-year old dressage horse qualifier finished, it was clear that Trakehner licensed stallion Imperio (by Connery x Balfour xx) would become the winner with his supple, energetic gaits and extremely smooth rideability. He won the qualifier with a 9.0 though had Rock Forever on his heels (8.9). In the finals, Imperio and his rider of one year, Anna Sophie Fiebelkorn, scored supreme marks that landed him at the top. He received a 10 for trot, 9s for his canter and submission, 8 for walk and 9.5 for general impression. Total score 9.10.

Only one month ago, Imperio was silver medallist at the 2008 World Young Horse Championships, but in Warendorf he was the best. Trained by Hans Heinrich Meyer zu Strohen, Fiebelkorn and Imperio impressed with their general elasticity and everything went right in the test, except for the walk pirouette.

The horse could track up even more and be more closed in the frame, but that is something they can still work on. Imperio is owned by Gestut Horum. 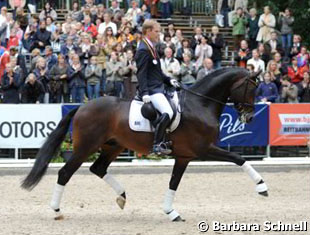 Reserve champion in the 5-year old division was the Westfalian licensed stallionRock Forever (by Rockwell x Landstreicher). Under Olivier Oelrich, the bay excelled with his three big basic gaits. He looked much more co-operative in Warendorf than at the World Championships in Verden and his rider Oelrich was, thank god, more subtle and kind with the aids, even though the horse could be more light in general. The only mistake appeared in the canter, when Rock Forever made a flying change before the simple change. Rock Forever scored 9.5 for trot and walk, 8.5 for canter and general impression and 8.0 for submission. Their total was 8.80.

The third place went to the Westfalian gelding Wyllow L(by Wolkentanz II x Don Primero x Fruhlingsball) presented by PSI rider Insa Hansen. The chestnut was a bit spooky in the ring, but Hansen steered him round with much professionalism. Trot and walk were the horse's best gaits (8.5), in canter he could have been more ground covering (8.0). Overall they achieved 8.60. This horse will be up for auction at the 2008 PSI Auction in Ankum, Germany, in December. 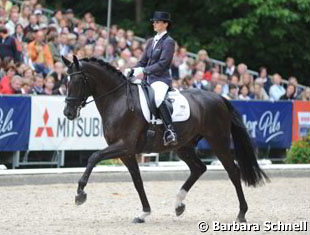 The most striking happening in the 5-year old Dressage Horse Finals was the downfall of the hopefuls for a medal at the Bundeschampionate. Desperado OLD (by Dressage Royal x Rouletto), the 5-year old World Young Horse Champion, finished only on eighth place under owner Nadine Plaster. In the qualifier, the black gelding made unscripted flying changes in the counter canter. In the finals, he did exactly the same thing. The judges downscored this with a 7.5 for his canter (which was not loose through the back) and for submission.

World Champion bronze medallist Silberaster OLDhad to be withdrawn for the Finals. The black temperamental mare by Sandro Hit x Canaster had a very disappointing go in the qualifiers in which she was resistant, against the leg and disobedient. She won the consolation finals to obtain a ticket for the finals, but during the warm up for the finals, the mare spooked, jumped out of the ring and became unlevel. Helen Langehanenberg withdrew from presenting her.