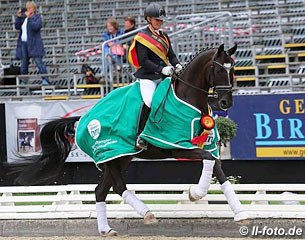 Ann Kathrin Pohlmeier and the British owned Hanoverian Dancing Diamond became the winners of the 5-year old dressage horse finals at the 2016 Bundeschampionate on Sunday 4 September 2016. The pair scored a winning 9.30 to claim the champion's sash and German Young Horse Champion's title. Champagner finished with silver and First Ampere got the bronze.

After placing 8th at the 2016 World Young Horse Championships in Ermelo, The Netherlands, one month ago, Pohlmeier and the Hanoverian gelding Dancing Diamond (by Dancier x Wolkenstein II) began their run at the Bundeschampionate with a fourth place and 8.20 score in the preliminary round. In the Finals judges Horst Eulich, Kerstin Holthaus and Klaus Ridden saw the winner in him. Dancing Diamond is bred by Heinrich Ebeling and owned by the British Lordswood group, consisting of Alice Whitefield and Heather Stack. The dark bay gelding scored 9.5 for trot and canter, 8.5 for walk, 9 for submission and 10 for general impression. 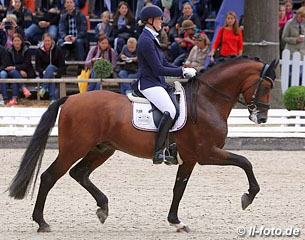 The reserve champion's title went Wilhelm Ruscher-Konermann's Holsteiner stallion Champagner (by Catoo x Aljano). The bright bay stallion ridden by Claudia Ruscher and bred by Erja Aholainen was fourth in the preliminary round with 8.20 points, and improved his act in the finals to finish second overall with 8.80 points. The pair got 9 for trot and canter, 8 for walk and 9 for submission and general impression. 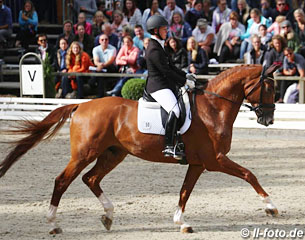 Kira Wulferding and the Wittig family's home bred Belucci W (by Boston x Bismarck) just landed outside the podium place and became fourth with 8.5. The Oldenburg stallion got 9 for walk and trot, 8.5 for canter, 7.5 for submission and 8.5 for general impression.