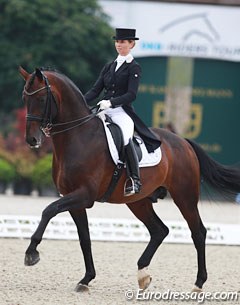 The final qualifier for the 2016 Louisdor cup Finals is approaching in two weeks at the 2016 CDI Donaueschingen. Eight qualificants are already known after four qualifiers. Two more will be added to the list for the Finals after Donaueschingen. The Louisdor Cup is the German show circuit for Developing Grand Prix horses.

The 2016 Louisdor cup show circuit kicked off in Hagen at Hof Kasselmann where Anabel Balkenhol with the Trakehner stallion Heuberger (by Imperio) won the qualifier ahead of Kathleen Keller on San Royal (by San Remo x Grand Royal).

At the qualifier in Munich Ursula Wagner and Dilenzio (by Duino x Weltmeyer) as well as Fabienne Lutkemeier and Fiero (by Furst Heinrich) earned their ticket. In Heroldsberg Heiner Schiergen and Discovery (by Dimaggio) and Susan Pape on Don Noblesse (by Dancier x Don Davidoff) were the top two finishers.