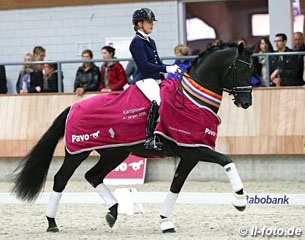 The 4-year old Happynesse E, the 5-year old Toto Jr and the 6-year old Fenix became the winners of the 2016 Pavo Cup Finals, which are the KWPN young Dressage Horse Championships held annually at the KWPN Horse Days in Ermelo, The Netherlands. For the first time this year the Pavo Cup Finals also included a 6-year old division as before there were only Championship for the 4 and 5-year olds.

Due to the rainy weather the 2016 finals were held indoor at the KWPN headquarters in Ermelo, which hosted the World Young Horse Championships two weeks ago.

The finals indoor were quite a challenge for some of the 4-year olds who no longer had visibility on their peers and became tense in the different arena from the semi finals. Many combinations were unable to match or improve their semi-final’s score. Especially KWPN-stallion Total U.S. (Totilas x Sir Donnerhall, breeder Gestüt Lewitz, Steinfeld) had to give in points for harmony because of the tension. This resulted in a drop from first to sixth place the rankings.

However, Happyness E (by Rousseau x Houston, breeder G.C. van Eck, Linde) seemed to feel very comfortable in the ring. Under Lynne Maas the young talent scored 88 points in the final, one point higher than in the first round. A total of 175 made the pair the convincing winners. 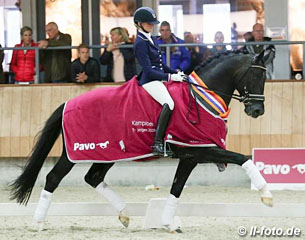 The Hanoverian bred and registered and KWPN licensed Toto Jr became the winner of the 5-year old division. Under Marieke van der Putten, the black stallion, who was remarkably absent from the World Young Horse Championships, dominated the Pavo Cup Finals in The Netherlands.

In the final the top two ranked combinations from the semi finals kept their form and held their position in the final rankings. The Austrian owned Toto Jr. (by Totilas x Desperados, bred by Schmidt from Naumburg) received straight 9.5s. Guadeloupe-Beau (by Bordeaux out of Beau-Verina, bred by P.Rulkens from Biest Houtakker) under Kim van der Velden matched their 92 points of the semi-final. Great Lady TC (by Bretton Woods  x Osmium, bred and owned by T.J.M. Coomans from Oud-Beijerland) and Jeanine Nieuwenhuis improved last Monday’s score of 86 points by two points.

Judge Monique Peutz commented on Toto Jr: “The fact that I did not take notes but only watched already says it all:  a lovely test that we truly enjoyed.” 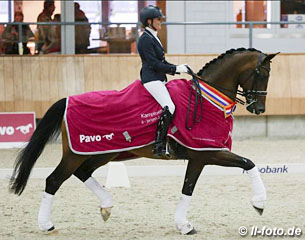 Emmelie Scholtens and the bay KWPN bred Fenix renewed their Pavo Cup Champion's title as they won the 6-year old division. Fenix (by Vivaldi x Houston, breeder H Germs, Midwolde) was invincible last year and won the 2016 semi finals as well as the finals. With a finals' score of 89 points, the pair totalled a gold medal earning 177 points.