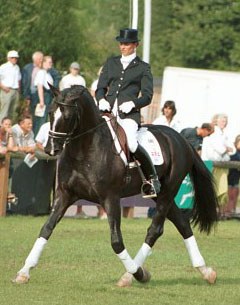 The 6th edition of the Pavo Cup, a series of shows exclusively for KWPN young dressage horses, concluded at the KWPN Paardendagen in Ermelo, the Netherlands August 24 - 25, 2000.

Cultivating a growing interest for the circuit each year, the selection trials produced a field of approximately 50 horses per age class for the ultimate finals in Ermelo.

The Pavo Cup Final was being held during the famous KWPN Paardendagen, the KWPN national breed championships. While last year all honour went to the Broere stallion station which captured both titles, this year it were two outsiders that seemed to be blooming at the end of the show season. The finals consist of two tests: a qualifying test judged by KWPN stallion commission members Frenk Jespers and Bert Rutten and by O-judge Jan Peeters, and a final in which guest riders test the horses.

This year the Belgian Jean Bemelmans and the German Holga Finken were invited. This year the judging of the qualifiers and preliminary shows, held at various KWPN mare breed shows in the Netherlands, received much criticism as too many horses of mediocre quality were being presented at the finals.

"Striking is that actually only stallions and gelding were able to reach the finals," Dutch equestrian journalist Steven Stegen said. "Only one mare made it into the final (at the KWPN Paardendagen), and that was Nisjida ridden by Marie Jose Hulsman."

It was the KWPN-approved stallion Osmium (Ferro x Calypso I) that performed the best amongst the 4-year-olds. Nicolet van Lierop rode a strong first qualifier and scored 80 points which placed her fourth in that first leg. In the finals, guest riders Jean Bemelmans and Holga Finken agreed that Osmium was the best and with 35.5 points' difference, the black stallion received the laurel.

The 4-year old reserve champion was the black coated OO Seven (pictured). He is trained, ridden and shown by Imke Bartels. In the Pavo Cup OO Seven scored consistently an average of 79 points and became second overall. Runner up was Rubels, a horse by Rafurstinsels (by Rubinstein) out of a Amethist dam.

In the five-year-old division the bay gelding Natcho, registered under the name Narco, constantly hit 80 points which made him a solid winner for the 2000 title. Bred by L. van Roessel from Axel (NED) and owned by A. Roefs from Moergestel (NED), Natcho descends out a Hofnar x Lt Generaal lineage. It was Angelique van Oss who rode the supple bay to victory.

Reserve Champion was last year's 4-year-old winner Broere Norway. The liver chestnut Jazz x Ulft approved son had a poor start in the qualifier but shaped up in the finals under both guest riders. Another Hofnar get, Nostradamus, was worthy the runner up position in the overall ranking. Under Mieke de Kok, the former owner of American import horses Congo and Ainsley's Goodfellow, Nostradamus  appears to be a real prospect for the future.