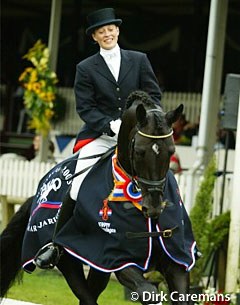 The winners of the Pavo Cup Semi Finals, 4-year old Special D and 5-year old Robin Hood, were able to maintain their lead and win the 2003 Pavo Cup Finals.

Especially the five year old Champion made a huge impression in Ermelo at the KWPN Paardendagen as he beat 2003 Reserve world champion Hilltop Rousseau in a tight competition.

Guest rider judges Ellen Bontje and Tineke Bartels had to make a tough decision in picking Robin Hood or Rousseau as winner. Both riders gave the horses a 9.5 rideability scores, but Robin Hood won the 2003 Pavo Cup Finals as he also won the semi finals. "On Robin Hood, all the buttons are there. He's more elastic and energetic as Hilltop Rousseau, but Rousseau is more advanced in his overall training, so I can't make a difference," Tineke Bartels said to KWPN reported Claartje van Andel.

Ellen Bontje commented that "Rousseau is an all round, professionally trained dressage horse, but Robin Hood is fantastic as he extends and collects with such great ease." 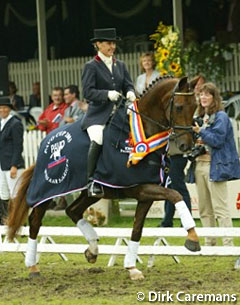 Winner of the 4-year old division was licensed stallion Special D. Tineke Bartels was the one who made Special D win as she granted the stallion a 9.5 score for rideability, while Bontje scored him 9.0. Special D showed himself as an extremely supple horse and, therefore, scored high in the semi finals and finals.

Ellen Bontje preferred the chestnut stallion Scandic to Special D. Scandic got 9.5 from Ellen, but Tineke "only" gave him 8.5.