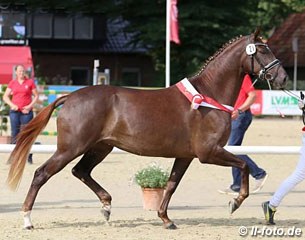 The liver chestnut Ballerina (by Belarus x Florestan) was named the champion of the 2016 Westfalian Elite Mare Show in Munster-Handorf, Germany, on 29 July 2016.

Ballerina is by Belarus out of Franziska (by Floresta) and is bred and owned by Walter Droege.

Eight dressage bred mares were invited to the champion's ring to battle for the overall title.