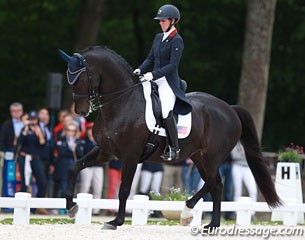 American duo Kasey Perry-Glass and her Danish warmblood gelding Gorklintgards Dublet proved that they are rocking for Rio by winning the Nations' Cup Grand Prix at the 2016 CDIO Compiegne in France on 19 - 22 May 2016. Making a phenomenal European show circuit debut with a jawdropping performance, Perry and Dublet scored 77.440% for victory.

Perry and her 13-year old Gorklintgards Dublet (by Diamond Hit x Ferro) were fairly new comers on the American scene and totally unknown to the European crowd. Perry discovered Dublet in Denmark and bought him as a green small tour horse from Anette Ejlersgaard. The pair began competing at international small tour level in California in April 2013 and made its Grand Prix debut in January 2016 in Wellington, Florida. In five months time they have transformed from a strong 72% scoring pair into probably one of the biggest shooting dressage stars in the world. We predict that they will be America's new number one in a few months time and if they continue to develop at this speed, they could even be Olympic medal contenders in Rio in the summer!

Perry and her dark bay gelding were already the eye-catchers on the Dressage in Floride show circuit, but with consistent training under the supervision of U.S. developing GP horse trainer Debbie McDonald they have achieved greater heights. In Compiegne their Grand Prix test was nothing short from stellar! 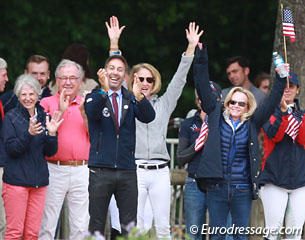 Gorklintgards Dublet showed lovely suspension in trot, the extensions and the half passes. The passage was fantastic and the first piaffe had a super rhythm even though he was still slightly creeping forward. The extended walk was nice, but unfortunately in the collected he became totally laterally and stiff in the back (average score 5.6). The second piaffe-passafe was delightful with amazing regularity and bounce, even though the horse dropped behind the vertical too much. The canter work was extremely solid with a very controlled extended canter and world class one tempi changes. The left pirouette was a bit flat, the right one better but both were very tiny. The final centreline with outstanding rhythm and regularity was the icing on the cake. Throughout the test Dublet was super in the bridle. He was supple and soft in the contact and very quiet in the hand, which is what real dressage is all about: lightness and harmony.

The Grand Prix was judged by five members who will also be serving on the ground jury at the 2016 Olympics Games in Rio: Gary Rockwell, Jean Michel Roudier, Maribel Alonso, Peter Holler, and Susanne Baarup. Compiegne was thefore the perfect ground to pre-expose oneself to the Olympic panellists.  They scored Perry a 77.440% in total with scores ranging from 76.00 to 79.600%. Baarup was the high score and seemed the best on the ball as Dublet certainly performed an 80% scoring test, despite the poor collected walk. Perry is sure to achieve that magical score soon if she continues to ride this way. 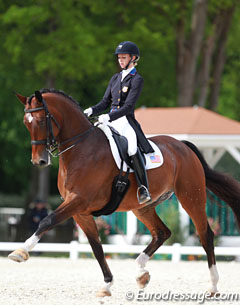 As much as Perry and Dublet found their groove in the beautiful green surroundings of the Compiegne equestrian park, that much unsettled was Laura Graves 2015 U.S. Grand Prix Champion's horse Verdades (by Florett As x Goya).  The powerful 14-year old Dutch warmblood gelding was spooky on the long side and his distraction led to Graves making a string of mistakes. The trot tour was powerful with strong extensions and floating half passes but in the second extension there was a loss of rhythm and in the first passage he moved away from the track. The passage is elegant but in the first piaffe there was no sit at all. The body tension also became clear in the extended walk where the horse could have stretched more over the back to get more ground cover. In the second piaffe he leaned on his butt and lost the rhytmn in the passage spooking. The extended canter was too conservtive but Verdades has such an uphill canter stride. In the one tempi changes Graves made a counting mistake and only rode 13 and then later added two more to fix it. Verdades can produce world class pirouettes but in the right one he changed track. The final trot extension was powerful but there needed to be more overstep. The third piaffe was the best one although Verdades swings much in the hind quarters. Graves  had her horse nice in the bridle but was unable to get rid of the tension and stay faultfree. The judges struggled to score this atypical test and had marks from 72.400 to an exaggerated 78.400%. The overall mark was 75.440%. 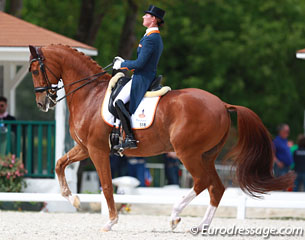 Dutch Adelinde Cornelissen is in her ninth year competing her 19-year old Dutch warmblood gelding Parzival (by Jazz x Ulft) and it seems that she wants to pull an Anky: competing her good-old Grand Prix horse one more time for Olympic glory as a contributing member to a Dutch Olympic team medal before granting her horse an already well earned retirement. With Wim Ernes not being as omni-present as Dutch team trainer because of his ill health, co-trainer Johan Rockx seems to have allowed the door to open again for Dutch team selection, which Ernes had firmly closed in 2015. Parzival looked willing to go in Compiegne but the brilliance, regularity, and athleticism, for which he was so well known and praised in his heydays, have gone. Cornelissen rode the Grand Prix with the hand-brake on and kept her signature style of hand-riding a horse discernable instead of using her seat. The mouth gaped more than regularly as the contact continues to be the weakest point of this combination, especially after seeing the lightness and softness of the hand and bit contact of Americans Perry and Graves.

Cornelissen had a very focused test and her strong suit was certainly her concentration.  The trot extensions and half passes were not as elastic and forward as they used to be. The rein back was very good. In passage the horse showed more right hind leg activity and the steps often became uneven, even though Parzival is still a lightfooted dancer. The piaffe had a very good rhythm but was slightly less powerful. The extended walk could have had more stretch over the top line and overstep. The collected was well ridden. In the second passage the left hind leg dragged behind and he travelled forward in the second piaffe as he had a tendency to back-step a bit, but the side silhouette was still beautiful. Parzival's best movements, without a doubt, remain to be the one and two tempi changes that are so straight and uphill. In the pirouettes he now drops on the forehand and there is less self-carriage, especially in the left pirouette. The right one was the better one of the two. 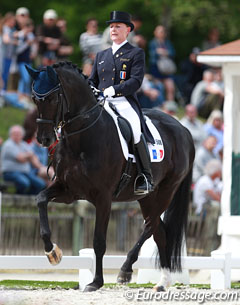 Cornelissen produced a very nice, controlled test, but it's a pity to see that the sparkle, for which Parzival was so unique and famous, has gone. Whereas in old days he scored 8s, 9,s and 10s for the movements, he now puts 7.5s on the board.  If Cornelissen can keep Parzival in fit condition she will have a chance to get back on the Dutch team; her 75% Grand Prix score will help for a potential Dutch Olympic team medal, but the individual podium will be highly unlikely.  The pair scored 75.400% in Compiegne with marks ranging from 73.400% to 77.500% (first with German judge Peter Holler).

French Karen Tebar and Don Luis could certainly have finished second in the Grand Prix had they not had two big mistakes in their test. The 11-year old Hanoverian gelding Don Luis (by Dimaggio x Rubinstein) twice broke into canter in the extended trot, which made them lose a huge amount of points. The piaffe-passage work was superb, the extended walk outstanding. The tempi changes are dead straight. The entire time Tebar has Don Luis very soft in the contact and overall they paint such a friendly, easy-going picture. They scored 75.060% for fourth place. 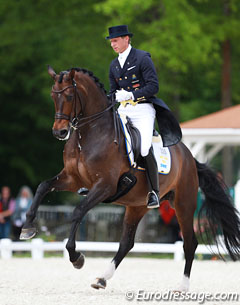 Patrik Kittel and Marie Haward's Swedish warmblood mare Deja (by Silvano x Don Schufro) completed the top five with a 74.640% earning test.  The pair rode an "interesting" test with piaffes that never fully reached the required amount of steps. This threw the judges off balance because they struggled to score it. The first piaffe scored marks from 2 to 5.  In the second piaffe (8 steps) the marks went from 6 to 7.5 and the last piaffe at X,  which was the best one despite a small hesitation, got marks from 5.5 to 6.5. On a more positive note, the tempi changes and the extended walk were fantastic.  The first trot extension was slightly crooked in the hindquarters, but the half passes were supple. The pirouettes were nice but the right one was slightly big. Overall there was good energy and forwardness in Deja's Grand Prix test. 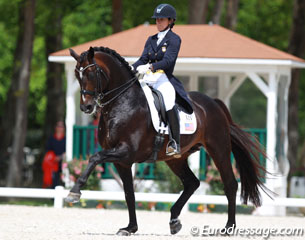 American Allison Brock and Fritz Kundrun's 14-year old Hanoverian stallion Rosevelt (by Rotspon x Lauries Crusador xx) were sixth with 73.920%. The dark bay stallion showed good half passes, energetic trot extensions, but in the first passage the hindlegs could move more under the body. The second piaffe and passage were strong. Occasionally the horse tilted the head to the left. The extended canter was beautifully uphill and the pirouettes were small, even though Rosevelt could generate more scope in front.