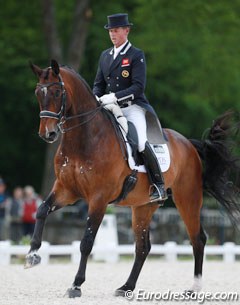 Carl Hester and his WEG and European Championships mount Nip Tuck won the 3* Grand Prix on the first day of competition at the 2016 CDIO Compiègne, which kicked off on Thursday afternoon 19 May 2016 in the lush, green equestrian park of the French town Compiègne. One hour north of Paris, Compiegne is one of the most beautiful, authentic international dressage competitions on the calender boasting a very joie-de-vivre lifestyle and atmosphere mixed with top level competition.

While Hester and Jane de la Mare's 12-year old Dutch warmblood Nip Tuck (by Don Ruto x Animo) were the clear favourites on the starting list for the 3* Grand Prix, it was smooth sailing at the start of their ride. Two mini-vans decided to leave the premises right at the beginning of Hester's test and their roaring engines upset Nip Tuck who spooked in the corner and needed a minute to get settled. Carl missed the 45 second deadline to ride on the centre line, wich cost him points, but the seasoned Brit remained cool as a cucumber and was able to get rid of the tension after a few movements.

Nip Tuck's first two trot extensions were quite conservative, the right half pass too passagey but the left one was smooth and fluent. The horse was a bit tense in the bridle at first but softened in the contact after a minute or two. The passage was bouncy with much suspension and the piaffe well ridden on the spot, even though he could be a bit quicker off the ground. The second piaffe lost a bit of forward tendency. The transitions to and from piaffe have improved considerably and were not so much stop-and-go as before. There was barely any overtrack in the extended walk. The canter tour was very solid with straight changes, a good zig zag and a controled extension. There was some loss of balance in the right pirouette. The final trot extension was also ridden on the safe side but the final centreline was sweet and Nip Tuck produced good square halts. 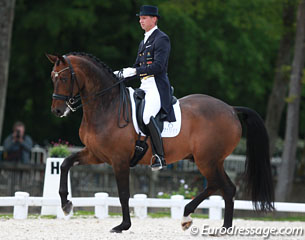 The 3* Grand Prix was judged by Maribel Alonso, Hans Christian Matthiesen, Eddy de Wolff, Gary Rockwell and Lionel Du Tranoy. Four of them placed Carl Hester and Nip Tuck first with a slightly generous total score of 74.160%. Nip Tuck is truly coming of age. His long back and slow hind leg were never his strongest assests but the bay gelding keeps exceeding expectations and improving beyond belief as months go by. Een though that today's ride was a test with the hand-brake on, it remained pleasing to the eye.

Swedish Patrik Kittel and the Oatley family's 10-year old Oldenburg gelding Delaunay (by Dr Doolittle x Feinbrand) were the runners-up with 72.780%. The elegant bay gelding produced balanced half passes and two rhythmical piaffes. The passage is lightfooted but the horse tilts his head to the right in that movement. The tempi changes are nice but the horse lost some straightness at the end of the diagonal in the two's and the ones need to be a bit more uphill and ground covering. The left pirouette was well ridden, the right one need more bending. The horse has scope in the trot extensions, but it didn't always show throughout each diagonal. The final centre line was really pretty. 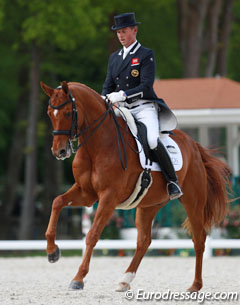 Carl Hester rode Coral Ingham's 15-year old Hanoverian stallion Wanadoo (by Wolkenstein II x Cavalier) to a third place. The chestnut stallion showed his tongue a bit on the left side at the beginning of the ride, but became more accepting of the bit later on in the test as Carl kept a quiet, soft and steady contact. Wanadoo is not the most supple and round mover. He is quite stiff legged in trot and canter, but he showed super willingness to work and obedience. The passage was soft and fluent, the piaffe had nice sit, but the steps were quite timid and the transitions need to be more fluent. The tempi changes were correct but could gain in ground cover. The last trot extension was the best one of the three. The final passage on the centerline was lovely, but the horse lost some balance in the piaffe at X and became wide in front. The entire ride looked soft and friendly. Wanadoo scored 72.020% 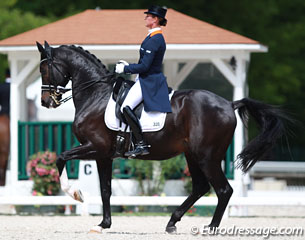 Adelinde Cornelissen made her international debut aboard her new Grand Prix horse, the 11-year old Dutch warmblood stallion Aqiedo (by Undigo x Metall), which she has been training since November 2013. The black stallion is definitely an eye catcher with his long legs and graceful way of moving. Cornelissen was very focused on her horse and had a nice ride. While the horse does not really chew on the bit nor is he elastic and light in the contact, he obediently listened to the aids and showed very lightfooted passage work, smooth transitions to piaffe and good activity in piaffe. There were still several small beauty mistakes. The halt was wide, the first trot extension conservative and the first piaffe too forward, but the one tempi changes were lovely. In the two's he swayed a bit to the left with the hind quarters, and sometimes in passage he was more active with his right hind leg. The horse also lost his balance coming out of the piaffe at X, but overall it was a promising ride. They scored  71.880%. 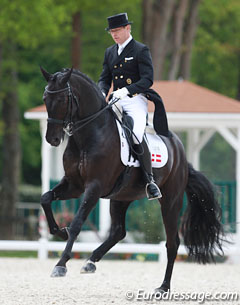 Danish Anders Dahl presented his wife Fiona Bigwood's American bred Hanoverian Selten HW (by Sandro Hit x Hohenstein) and showed many beautiful things. The appealing black gelding is very elegant and lightfooted in trot, the half passes and passage. The piaffe is still very unbalanced as the horse gets extremely wide in front, or when he closes up in front, he steps on his coronet bands behind. In the collected walk the horse slightly lost some clarity in the rhythm. The zig zag was well ridden even though the final change was short, the two tempi's were good but the ones need to cover more ground. The pirouettes are promising, but the 12-year old still lost some balance in the left one. Overall the test stood out with Dahl's very soft and patient riding skills on a talented star that is still in full development. They scored 71.500%.

On Friday the Grand prix Special 3*, Intermediaire I and youth riders classes will take place. More to come on Eurodressage!

Text and Photos © by Astrid Appels - No Reproduction allowed